This video has been splattered across the internet. It is claimed variously that this is a proven hoax/totally true. We decided to find out what the people in the video are actually saying. My stepdaughter's boyfriend Ivan is translating it for us. However, it is apparently in an obscure Russian dialect. His initial impressions are that there is a lot of swearing, and something about it "having been eaten by dogs". We await the final results of his labours with great interest.

http://frontiersofzoology.blogspot.com/2011/04/titanic-turtles-of-tele.html
Posted by Jon Downes at 11:43 AM No comments: 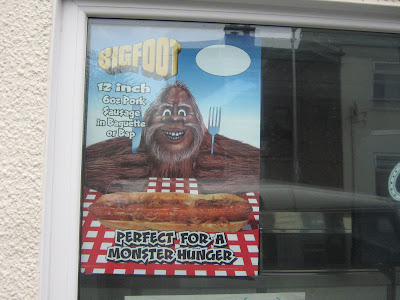 Folks, Macclesfield is again the centre of cryptozoological excitement as you can see from this photo of a poster of Bigfoot in the window of the Thai House Takeaway, just 60 seconds from my front door. The address is 168 High St Macclesfield, SK11 7QE 01625 427863.
Posted by Jon Downes at 11:28 AM 2 comments:

VietNamNet Bridge – Dr. Tran Binh, Director of the Institute for Biological Technology, on April 18 told VTC News that the institute had finalized the DNA test of the legendary turtle in Hanoi’s Hoan Kiem Lake. They claim that the turtle is not a specimen of the massively endangered Rafetus swinhoei after all, but a new species they have named Rafetus Vietnamensis. However, as far as I was aware, the Hoan Kiem animal had already been named Rafetus leloii. I am confused!

However, there is a whole slew of Hoan Kiem stories here, including claims that there may be as many as three turtles in the lake, and an account of the lonesome death of the last known turtle.

But you who philosophize disgrace and criticize all fears
Take the rag away from your face
Now ain't the time for your tears.

Hoan Kiem turtle moved to “sanatorium”
Many people see two Hoan Kiem turtles
Hoan Kiem turtle fished out for treatment
The death of the giant turtle in Ngoc Son Temple
The origin of Hanoi’s legendary turtle
Posted by Jon Downes at 11:10 AM 1 comment:

Email ThisBlogThis!Share to TwitterShare to FacebookShare to Pinterest
Labels: turtle

http://cryptozoologynews.blogspot.com/
On this day in 1944 the adventurer Steve Fossett was born.
And now, the news:

It's all white to be a rare sight in the bush
Illinois Residents Report Large Snake on the Loose...
Prehistoric Human Brain Found Pickled in Bog
BP oil spill: The environmental impact one year on...
Fossil from 275 million years ago shows oldest abs...

Steve Fossett was a legend:
http://www.youtube.com/watch?v=Vjmr89Hiipk
Posted by Jon Downes at 11:09 AM No comments:

ANDREW GABLE: The Untold Story of the Houston Batman

One of the iconic sightings of a mysterious creature in the UFO era, that of the so-called Houston Batman, was made on June 18, 1953. Hilda Walker, Judy Meyers and Howard Phillips saw a “man with wings like a bat” sitting in the branches of a nearby tree, watching them. After a few moments there was a light display and the “Batman” was gone. The story is a classic in the annals of UFO encounters and associated creature sightings, and is dealt with in full in Ken Gerhard and Nick Redfern’s Monsters of Texas, and Loren Coleman’s Mysterious America, where it is dealt with in connection to that likewise-iconic phantom attacker, the British bogeyman known as Spring-heel'd Jack.

It turns out the likening to Jack and other phantom attackers may be particularly apt. The Lubbock Evening Journal for May 22, 1953 bore the headline “’Phantom Attacker’ Strikes in Full View of Two Officers.” The article told the story of Betty Lee Jamison, a young woman who was walking on Richmond Avenue when a man lunged from a crowd, knocked her to the ground, and fled with four men in pursuit – two policemen and two men coming out of a nearby bar. The man still escaped. Frank Murray of the Houston police department told the newspapers that it was the 13th such attack in the space of a year. I could find no references to the earlier attacks; perhaps some other intrepid CFZ member could, however.

The Mexia Daily News for June 12 (only a week before the sighting of the “Batman”) reported another attack. This time a woman was pulled bodily from a car. Again, the attacker fled. And still the attacks came, even after the sighting of the man in the tree. On May 7, 1954, the Galveston Daily News reported that an attack had taken place only two days before, but this was dealt with in no more than a passing manner. Once again, I could find no references in the intervening time, but that doesn’t mean they don’t exist.

Regardless, on May 6, 1954, an underwear-clad man described as a “prominent Houstonian… superintendent of a Houston hospital" was arrested and charged with indecent exposure and vagrancy after police received several calls that he was driving around town fully in the nude. To this he admitted, but he denied any involvement in the Houston attacks when questioned. In true Fortean tradition, though, I’m going to guess the saga of the attacker came to an end there, whether or not the man was actually responsible.

The El Paso Herald-Post, on April 13, 1953, carried the story of another attacker, described as a black man, who robbed, attacked women and in one case, murdered, in the vicinity of Waco. This very well may have been a criminal of the more conventional type (as the one in Houston could have been), but I mention it in regards to reports that he “flashed a light in [his victims’] faces,” a typical Springheel activity.

Whether the “Houston phantom” truly explains away the Batman remains to be seen. At the very least, it should establish that a mindset of fear existed among Houston’s residents at the time. It likely is the explanation for why there were several witnesses to the Batman. Or, it may suggest that there is much, much more to the Batman story than one isolated sighting.-- Andrew D. Gable CFZ-US State Rep: Pennsylvania/Maryland http://masksofmesingw.blogspot.com/

For years, people all across the British Isles have been reporting sightings of large, exotic cats of a type that most certainly should not be prowling around the nation’s countryside, and which have become known as “Alien Big Cats,” or ABC’s. While I am personally convinced that the overwhelming majority of these curious cats are wholly flesh-and-blood animals, there are, a few incidents that, for some people who have been exposed to the controversy, seem to suggest far stranger points of origin for at least some of the cats in question. Three such cases from my files all originate within the dense woods of an area of central England called the Cannock Chase.

Ten major natural history museum libraries, botanical libraries, and research institutions joined together to form the Biodiversity Heritage Library Project. They are developing a strategy and operational plan to digitize the published literature of biodiversity held in their respective... 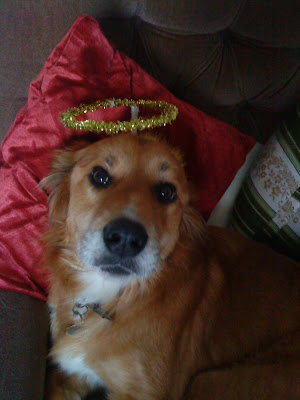 A sad phone call last night from Emma Osborne. Matthew's dog Ragyle, who is well known to attendees of the Weird Weekend cocktail parties since 2006, developed epilepsy some time ago and it has been getting worse. Sadly Ragyle was put to sleep yesterday, and we all join with Matt in mourning his loss....
Posted by Jon Downes at 11:01 AM No comments: 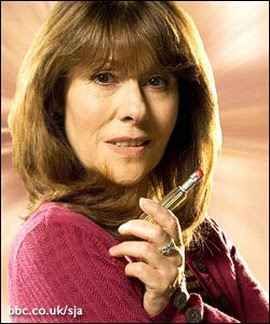 As a kid at my school, we played at Dr Who en-masse. I was usually the third Doctor or sometimes the fourth. Other kids would play the Brigadier, Benton, Yates or other members of UNIT. Other kids would be Sea Devils, Autons, Yeti, Axons (spaghetti men, we called them), Daleks, Zygons, Krynoids or Cybermen. But the girls; they all wanted to be Sarah Jane Smith.

Sarah was the companion to many people. She was beside the Doctor in many of his most memorable adventures. Never just a yes-girl or a helpless shrinking violet, Sarah was often just as instrumental in saving the day as the Doctor himself. When she came to the role, Liverpudlian actress Elisabeth Sladen was relatively unknown, having had small roles in Some Mothers Do Ave Em, Doomwatch, Coronation Street and Z-Cars.

When the brilliant Katy Manning bowed out of Dr Who, Z-Cars producer Ron Craddock recommended Elisabeth to Berry Letts who was Dr Who’s producer at the time. She proved an instant hit with both Letts and Jon Pertwee.

Her character was one of the most fondly remembered companions in the history of the series. Especially fondly remembered is the team of Tom Baker, Liz Sladen and the late Ian Marter as the fourth Doctor, Sarah and Harry Sullivan.

Such was her popularity that the character was brought back time and again, firstly in 1981 for the ill-fated spin off K9 And Company, then in 1983 for the 20th anniversary special The Five Doctors.

She was brought back for a showdown with Davros and the Daleks in Stolen Earth and Journey’s End, again with David Tennant. She had last encountered them in the 1975 epic Genesis of the Daleks. Davros even comments on remembering her face. Liz worked alongside the new Doctor, Matt Smith, and her predecessor Jo Grant in Death of the Doctor.

I met Katy Manning shortly after and she eulogised on what a joy Liz had been to work with.

It was great for many of the old fans who recalled Sarah Jane as a heart throb from the ‘70s to see her back, now like an eccentric, lovable favourite aunt. Liz died suddenly on April 19th. She had been suffering from cancer but few fans knew; she looked so well and had carried on with her acting regardless. It feels as if a part of the universe has fallen away leaving a bottomless void.
Posted by Jon Downes at 10:57 AM 1 comment: