THE GONZO BLOG DOO-DAH MAN IS IN THE EAST

The Gonzo Daily - Monday
www.gonzomultimedia.co.uk/about.html
Graham here again, as Jon and Corinna are still on their family-visiting travels in Eastern England.

On Saturday, Jon described how we'd had a bird rescue brought to us - a baby pigeon that had been caught by a cat. Although there was little sign of injuries, it didn't survive the night, which is often the way with bird rescues.  The rest of our menagerie is in good shape, though.
I'm reasonably fueled-up as I did a casserole (hotdish) that was intended to last for several days but which is tasty enough to be shrinking fast... alarmingly fast, in fact! Still, I suppose there's always eggs on toast as an emergency backup.
And today's musical stew on the Gonzo Blog is:

And a reminder that the latest Gonzo Weekly (#118) is at
www.gonzoweekly.com
Hawkwind, Tempest, Eliza Carthy, Daevid Allen, Jon Anderson, and Yes fans had better look out!


* Jon Downes, the Editor of all these ventures (and several others) is an old hippy of 55 who - together with an infantile orange cat named after a song by Frank Zappa puts it all together from a converted potato shed in a tumbledown cottage deep in rural Devon which he shares with various fish, and sometimes a small Indian frog. He is ably assisted by his lovely wife Corinna, his bulldog/boxer Prudence, his elderly mother-in-law, and a motley collection of social malcontents. Plus.. did we mention the infantile orange cat?
Posted by Jon Downes at 4:10 PM No comments:

An entomologist from London is using his favorite childhood toy to build a device that holds fragile insect specimens. 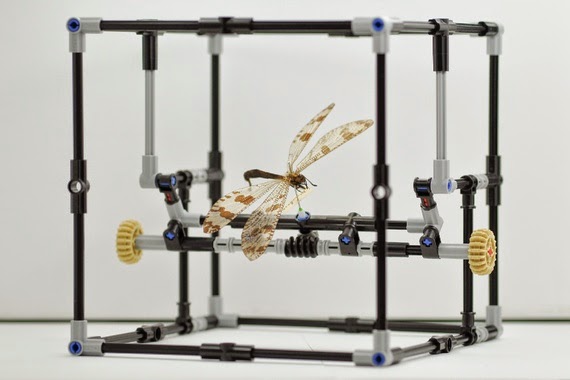 The Natural History Museum in London has a gargantuan task ahead: the mass digitization of its sprawling collections. Over the next five years, the museum plans to scan more than 20 million pinned specimens. The job will require imaging an inordinate variety of insects, from metallic-green beetles and butterflies as colorful as a Monet, to tropical parasitic wasps and grasshoppers from Mount Everest.

But photographing tiny bugs can be tricky. Meaningful images must capture minutiae such as leg hairs, wing tips, and antennae. And gathering those details is challenging for museum researchers dealing with fragile specimens, some of which are more than 300 years old. “Every time you pick one of these up on a pin, there’s a chance they will break because they are very brittle,” said Steen Dupont, an entomologist at the museum. “But we still want to image the insects to make them available.”

Though there are several commercial devices that allow entomologists to manipulate pinned insects without touching them, most are often bulky and expensive. Dupont wanted something that was cheap, portable, and customizable so that he could observe the wings of his moths easier. So he turned to Legos, his favorite childhood toy, to construct something new.

Posted by Jon Downes at 3:40 PM No comments:

ON THIS DAY IN 1919, Benito Mussolini formed a new party and named it the Fascist Party.

And now the more recent news...


Lemmy of Motorhead joins Hawkwind onstage for "Silver Machine" in July 2004 - the most recent date that Lemmy did that.