EDITOR'S NOTE: At the 2009 event Harriet met Neil Arnold and bought his two CFZ Press books. Neil was forced to cancel his 2010 WW appearance due to work commitments, although he has said that he will do his best to get to the 2011 event. Harriet is still not placated, and continues to berate poor Neil. If she is like this at 11, God help some poor lad in ten years time LOLOL

Now to inform those such as Neil Arnold (I’m talking to you again!!) just what was relayed to the spectators of the Australian Big Cats lecture… 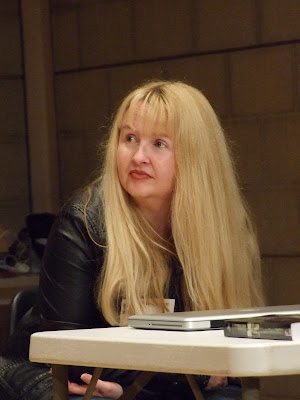 As the lights dimmed and the first slide came up on the projector, the sound of what Rebecca afterwards identified as a cougar growl echoed around the lecture theatre. She introduced her talk and then the next slide appeared - a family-friendly warning, letting it be known that during the presentation there would be films that would make some people uncomfortable or that parents may not want to let their young children see. I don’t think there were any young children or any squeamish people in the audience; however, the warning wasn’t wasted on anyone because we could be prepared for a bit of gore, such as the videos of the big cat prey.

A film that particularly startled me was one of some extremely badly mauled sheep. The sheep pictured in the film had the top part of its jaw chewed off and its tongue was dry from having had no roof over it. Sceptics, where’s your proof that big cats AREN’T in Australia? It couldn’t have been mauled by a pack of wild dogs as they usually all gang up on one animal, and the corpse would have been scratched and bitten all over. This big cat was interrupted during its feasting, which was why only the sheep’s muzzle was chewed. After filming, the injured sheep were put down.

Rebecca commentated on all the videos as they were playing, giving the facts to us so we could see the scenario clearer; also she told us about people she had had a conversation with about Australian big cats; during these the other person gave their opinion about the subject at hand. So, Neil Arnold, here is your summary of an awesome talk. I hoped you enjoyed it and keep reading, fellers!

Or rather, a big feline-looking predator with a head that looked distinctly possum-like, instead of the distinctively shaped feline head. No modern felid looks like that; no ancient one did, either.

However, remember where this was seen: Australia. Australia used to have a proper contingent of wildlife, just like Africa still does; Australia still has the equivalent of deer and gazelles (kangaroos and wallabies), plus a goodly number of small rodent-like things and small predators. It used to have a meso-predator, the Thylacine. It also had megafauna in the form of the diprotodonts and the giant predatory lizard Megalania. It finally had its very own top predator, Thylacoleo.

Rock paintings of this animal exist, and show an animal with a very heavily developed front end, and a vaguely possum-like head. Overall the beast would have been stocky, very powerfully built and in common with most marsupials shy and cryptic but not actually very bright compared to similar placental mammals. Its teeth were the most highly specialised towards carnivory of any mammal, and indicated an animal that killed by inflicting cutting bites on prey (as opposed to modern big cats which kill be suffocation, or modern small cats which kill by biting the neck of prey).

One of the Australian Big Cat sightings sounded very, very suggestive indeed of something that was not at all feline and that for me was the most exciting part of the entire talk; just imagine if Australia's original top predator is still alive!

Thanks Harriet :-)
And yes Dan - a scary thought indeed! Maybe it explains all those missing bushwalkers :P
But seriously, those sightings boggle the mind and of course we just had to include them.
On a less serious note, Jon & Co., I'm on the hunt for whoever took, and then authorised the use of, what must be the most unflattering photo ever taken of me since I had the chicken pox at age 13! :-)