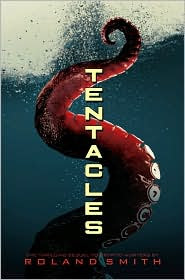 I have spent Sunday afternoon in bed and rather than surrendering to the arms of Morpheus, I have spent the time reading this smashing book. It is the sequel to a book called Cryptid Hunters and therein lies a tale.

About six years ago I started an e-mail friendship with a girl from Indiana. She is called Elizabeth Clem, and she has been the CFZ Indiana rep. ever since. When I went to Illinois in 2004 we met up, and she was just as much fun in person as she had been by e-mail, and our correspondence continues intermittently to this day.

When Corinna and I got married two and a bit years ago, Elizabeth sent us some books as wedding presents, including the afore-mentioned Cryptid Hunter. I read it in a couple of evenings whilst recovering from our near-fatal carcrash back in September 2007. I was captivated. To give you a brief resume of the contents, here is a surprisingly inadequate synopsis from the author's website:

After their parents are lost in an accident, thirteen-year old twins Grace and Marty are whisked away to live with their Uncle Wolfe - an uncle that they didn't even know they had! The intimidating Uncle Wolfe is an anthropologist who has dedicated his life to finding cryptids, mysterious creatures believed to be long extinct.

That is a bit like describing Anna Karenina as being about a couple of Russian chicks and some horse racing, but it will have to do because I want you all to go out and buy both books rather than just relying on my say-so, so there will be a dearth of spoilers in this review. I enjoyed the first book mightily, and empathised to a certain extent with the hero; a large, bearded, semi-disabled bloke who liked animals more than people. So I wrote to the author who to my embarrassment, turned out to have been one of our members all along. I am not in the habit of writing fan mail, and since the age of twenty-five I think I have only done it four times: to Wreckless Eric (who ignored me), Mr Biffo (who became a personal friend), Yoko Ono, (just after I wrote my first book 21 years back) who sent back a Christmas card, and Roland Smith, who to my delight wrote back saying:

I actually thought about you when I was developing Wolfe and Marty... There is a bit of you in both of them.

This made my day, and I sat back for the next two years or so waiting for the sequel. Well, it's arrived, and it is even better than the first.

The first book was set at Lake Tele in The Republic of the Congo (for those of you who, like me, learned their geographgy from stamp collecting, this was the one that used to be the French Congo, rather than the other one that was originally Belgian, and then Zaire) and you cryptotypes who read this blog will not be at all surprised to learn that it was about Mokele Mbembe. It had a satisfyingly villainous villain, (Dr Noah Blackwood) but one who turned out to be a blood relation of one of the protagonists, which introduces a level of moral ambiguity that makes the story interesting on a level above the well crafted derring-do of the plot.

The second is set in the oceans off New Zealand and concerns an attempt (succesful as it turns out) to capture a giant squid. But "You rotter!" I hear you all shout. You promised that there would be no spoilers. Well, I lied. But only because the fact that the hunt is succesful becomes almost insignificant in the light of the other twists and turns that the plot takes.

For some reason, I was reminded of the late great Douglas Adams's two books about Dirk Gently's Holistic Detective Agency whilst reading this, because both authors seem to have a childlike delight in the wonders of new technology, and just like in the Dirk G books, Roland Smith keeps the new technological advances heralded in his prose completely believable, so that they are not even really within the realm of science fiction, although beyond the grip of known technology at the end of the first decade of the 21st Century.

The writing is tauter, darker, and - in places - nastier, than in the first book. Indeed, there is an undercurrent of elegant brutality, which I find most engaging. I also like the way that the back story of the two main villains is beginning to unfold, underlining the thing that my dear wife says to me on the occasions that I get arsy about someone or someones, that there are two sides to every story.

Even my fictional alter ego appears to have got his money by doing a covert job for the American Government, at such a level that the anarchist in me (which is most of me, remember) tells me that it could not possibly have been something of which I would have approved.

I can't wait for the sequel, because unlike the first book, which could have been a stand-alone novel, this one leaves a cliffhanger, which means that another sequel is damn well unavoidable. But don't worry: if you want to read this one without having read the first, it works equally well as a stand-alone novel. But I make a guarantee - anyone who reads this book (whether or not they have read the first) will be sitting on the edge of their chair waiting for the next in the series.

Well done Roland (can it be China next, although I suspect it will be South America first)
Posted by Jon Downes at 6:30 PM

Just to add that Roland Smith also wrote a novel called 'Sasquatch' a few years ago.

Like 'Cryptid Hunters', it is aimed at the younger reader, but I found it immensely entertaining. It is well worth reading.