WE WERE ONLY GOING TO THE PUB... 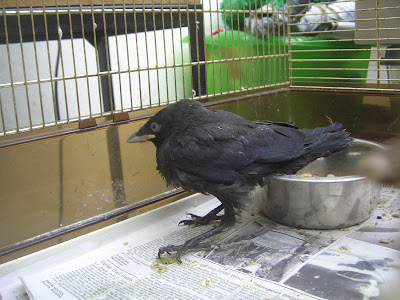 Last night Richard and I wandered up to The Farmers Arms at about nine. At the top of Chapel Street the dude who owns the fiush and chip shop had parked his van, and from underneath the van came a scrabbling noise. It was a semi fledged baby jackdaw which had obviously fallen out of its nest on the roof of the village shop.

Every time we tried to catch the poor little bugger, it scuttled further beneath the van, until eventually we had to borrow a pool cue from the pub in order to persuade it to come out into the open.

We picked it up, and this is where the heartrending bit happened: Its parents, alerted t 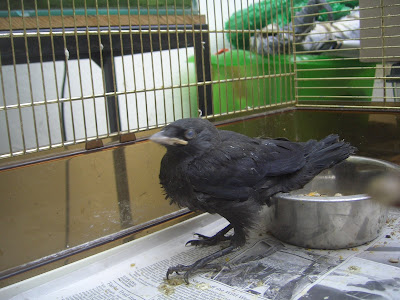 o the plight of their youngster by its squawks, divebombed us and started to mob us. I am getting more and more interested in (and impressed by) the social behaviour of corvids, since the two wild crows started visiting our captive one each morning for what I anthropomorphically surmise is a `chat`, or even a `prison visit`.

We got the jackdaw home, and into a hospital cage where we gave it mealworms, wildbird mix, a pheasant egg and some water, covered up its cage with a towel, and left it for the night. I am waiting for one of the qualified folk (Oll or Richard) to wake up before disturbing it, so at the time 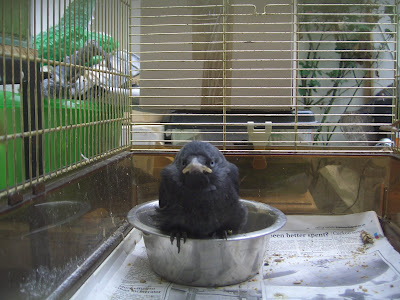 of writing it is in a state of indeterminancy something like Schrödinger's eponymous Cat.

If it has survived, then it should be fully fledged reasonably soon (in the cold light of day, I see that I overestimated its age last night - but it was the dimpsey), and we shall release it. If not, at least we saved it from being played with and killed by a cat, or stomped on by a drunken teenage lout (of which there were a disturbing number wandering, shouting, round the village last night).

UPDATE: The little bugger has survived the night, but is looking a little subdued. This is quite understandable, and we hope that he will perk up when he is moved into a proper aviary later today..
Posted by Jon Downes at 9:11 AM

I am not sure what you call a group of crows(a crowery?) but we have one near us. The birds have taken to sitting on the fence outside my back door and shouting to me on a morning until I put something out for them. They are comical,the way they strut about. They have given the cat a peck before now and chased him off the fence lol.I think they are great birds but they seem to get bad press.
my neighbours think I am slightly mad to ecourage them

Yay for you two! I hope this darling bird makes a full recovery.

Tabitca, I, too, encourage birds with bad press. A Mockingbird I have named Alexander owns my yard (back and front) and I enjoy watching him parade around. I plan to get him a bird bath and platform with things Mockingbirds like to eat. I have been reading up on it.