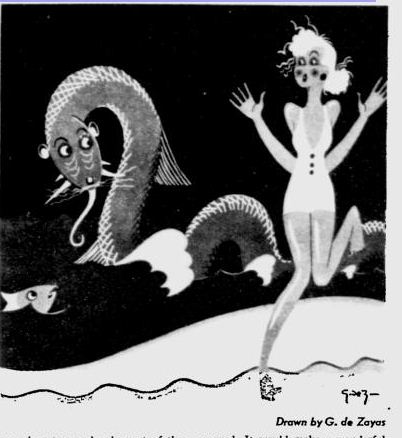 SEA SERPENTS OF THE SOUTH SHORE: A HISTORY OF DOCUMENTED AND REPORTED ACCOUNTS OF THE SEA CREATURES OF HULL AND SCITUATE
By Kristen Good
Massachusetts lays claim as being the first state to document a sea serpent sighting. An Englishman by the name of Josselyn witnessed a creature “coiled like a cable upon a rock in Cape Ann“in 1639. In August of 1817, the same area would be spotlighted when “The Gloucester Sea Serpent” was first spotted, appearing first local fisherman. The great creature was seen by locals almost every day that month. Books such as “Gloucester’s Sea Serpent” by Wayne Soinim and “The Great New England Sea Serpent” by J.P. O’Neill chronicle the mass sighting. The subject of the Gloucester Sea Serpent was even the featured on an episode of Animal Planet’s “The Lost Tapes” in 2008. And in that same year, The Museum of Science held an exhibit about the legend.
While legends of sea monsters in the North Shore have been spotlighted in the media for years, the sea serpents of the South Shore have kept their secret locked in the memory of the Hull residents who remember stories passed down through generations about the Sea Serpent sightings at Nantasket Beach and the surrounding area. The details of the legends lie scattered in long-forgotten newspaper articles, spanning over 100 years.
Read on...
Posted by Jon Downes at 12:12 PM