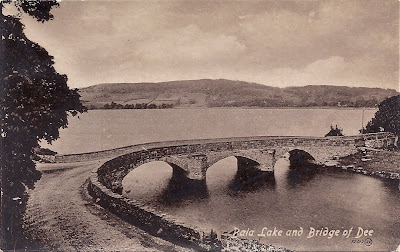 I`m going to stick my neck out and claim this as a “new” cryptid, or rather one I`ve not read about somewhere, which is hardly surprising  as I read about it for the first time in a letter to me from a total stranger in April 1995..

I had written to a local newspaper near Bala in Gwynedd about the local “monster” of , Teggie and I received two replies, only one of which was of any real interest, the other less so. But I am going to quote from both.

Firstly the letter from Mr E.R. Lucas of April 21st 1995.And this letter ends with a nice Fortean twist as you`re about to see. But let me first say that although there are eels in today, I very much doubt they ever reach one this big.

I am writing in reply to your letter in our local paper.

I don`t have much information about the monster in I can only tell you what I saw about 43 years ago. There was a place which was known as Sandy Pool (no longer there since the level of the lake was lowered) however, all the local kids used to swim at this spot, it was about 150 yards from the old Dee Bridge, after we`d been swimming we would run along the pavement to Dee Bridge [see image below from old postcard] with the purpose of drying ourselves.

On this particular time we ran to the bridge where there was a well known local fisherman fishing off the bridge (Old Jim Wood)  we knew better than to go near him when he was fishing, we got up on the lake side wall of the bridge and looking down into the water coming from under the bridge was what looked like a huge eel. It was what we thought at the time to be between 12 and 14 feet long very black and was moving very slowly. It was as round as a large bucket. We tried to get Mr Jim Wood to come and look but by the time he came across it had gone too far into the lake.

The other letter, undated, and anonymous, mentioned Gwyniad fish, endemic  in Lake Bala prior to 1948-50  and pike sold to Manchester but the author of the letter isn`t any more specific. The rest of the letter is concerned with lake “politics” for want of a better word. He also said Gwyniad were plentiful in (2)

The description of the giant eel sounds likely and even rather modest. A tyyyyyypical gianty eel report of this category wouls ordinaril be twice the length. That is one detail which makes the report sound more reasonable to me.