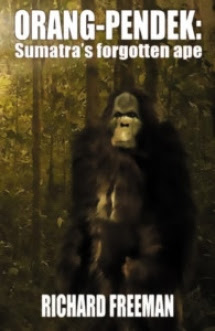 RICHARD Freeman is a long-time pal of mine.

Over the years we’ve shared conference platforms together, chased hairy ape-like monsters and generally engaged in a variety of other pursuits, both mundane and bizarre.

Richard is one of the world’s greatest experts in the field of cryptozoology – the study of mystery animals – and as regular readers know has written quite a few books on the subject.

In it, he details his ongoing search for one of the earth’s most enigmatic and elusive creatures.

When people think of hairy bipedal mystery animals most picture Bigfoot, but, as Richard points out, “for every Bigfoot there’s a Littlefoot”.

What on earth could he mean? Well, the Orang Pendek fits that description perfectly, for most estimates place it at around 5ft in height.

With its nut-brown hair and immensely powerful limbs, the Orang Pendek roams the jungles of Sumatra and has, up till now, managed to avoid being captured and taxonomically classified.

Some scholars deny that the Orang Pendek exists, but they are slowly dwindling.

Some experts have actually seen the Sumatran mystery ape themselves, and are interviewed by Richard in his book.

The creature, if not seen, is nevertheless often heard. Those who have been so privileged say that it utters something akin to a long groan followed by two short grunts.