This has been a remarkably busy week with all sorts of things happening, both good and bad: Dave B-P has been in hospital, a close friend is getting divorced, I have had various CFZ-related traumas and on top of this, my consultant has changed my medication and I am now floating around on a slightly spacy cloud, which is fun if a little disconcerting.

So I am a little behind on my nature diary.

Back on Sunday after we had all number of mild adventures on Northam Burrows (see HERE, and HERE and HERE) we went back to Huddisford to take Prudence for a walk. One cannot really let her out on the Burrows on a Sunday because there are too many other dogs - many not on leads - and she is a little unpredictable where her fellow canids are concerned.

There we noted that 'our' tadpoles had hatched and were developing nicely. 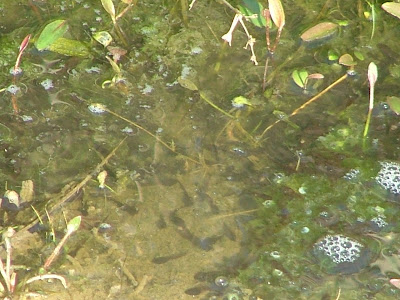 Actually, that is not quite true. We noted that they had hatched about ten days before, as you can see in this brace of pictures, which not only show the newly hatched porriwiggles, but also show a middle-aged Hawkwind fan filming them for next month's OTT: 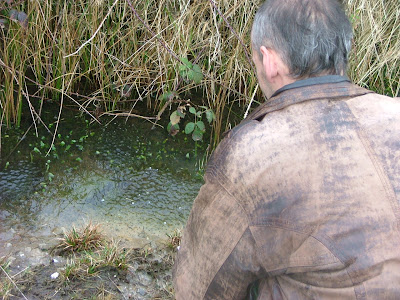 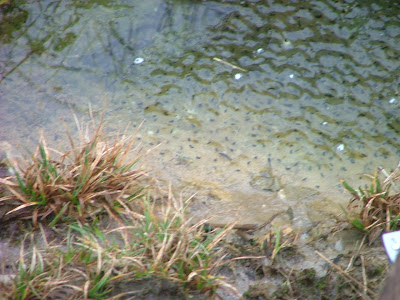 The trackways, which provide entrance and egress to the woodland, were well used, especially this one, which shows deer tracks as well as the tracks of a sizeable carnivore. We were quite excited at first, but Richard F. says that they are a dog. 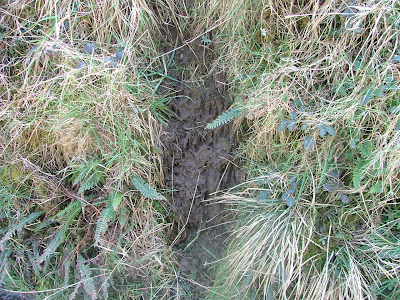 As much as I respect Richard´s knowledge, I´m not sure I agree.
Could you please give some rough measurement of the prints?

About two inches across. I should have photographed them with something as a scale marker, but i was thinking of them as curiosities rather than anything important JD