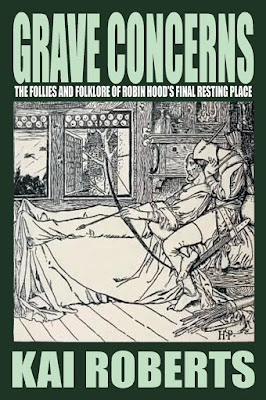 Whilst the existence of Robin Hood’s grave is scarcely a secret, appearing on the definitive map of the area and referred to in countless non-fiction sources concerned with the legend of Robin Hood, for the last fifty years it has been regarded as nothing but an annoyance by its custodians. It lies on private land without any right of access and visitors are categorically discouraged. Whilst this situation has improved over the last decade, opportunities for anybody wishing to glimpse the burial site of this legendary hero remain few and far between. For Robin’s modern followers, it has become an immensely contentious issue.

The subject of this book is a location rather than an individual. Countless volumes have been written on the topic of Robin Hood by some of the finest scholars of medieval history and literature in Britain and this tome does not seek to rival them. Arguments pertaining to the historical reality or otherwise of the outlaw will be discussed here only where they directly concern his grave. With regard to Robin Hood, the question for this book is not whether he is really buried at Kirklees but, for want of definitive proof either way, how that tradition became so firmly attached to the site. Hopefully, it will illustrate that Robin Hood’s grave is a site of historical interest quite irrespective of its ‘authenticity’.

For Kirklees certainly seems to attract strong beliefs, and in many cases changing perceptions of the site itself have coloured the content of those beliefs. Studying Kirklees and the various legends to have grown up around it allows us an insight into the reciprocal relationship between people and place. Of particular interest is the extent to which the state of Robin Hood’s grave in the modern era and all the associated disputes have determined the interpretation of the paranormal phenomena witnessed in the vicinity of the site today. In this regard, it is a study in modern myth-making.
Posted by Jon Downes at 12:08 PM