Growing concern for one of Devon’s rare birds 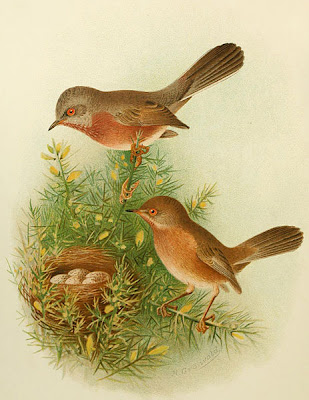 The RSPB has this week expressed concern over the population of rare Dartford warblers on the East Devon heaths.

Dartford warblers are only found on heathlands in the UK, and almost became extinct as a breeding bird here in 1960s. However, efforts over the past two decades to restore heathlands have seen the population recover. But a combination of two harsh winters and recent heathland wildfires has hit the birds hard in East Devon and there are fears for the bird’s future.

Toby Taylor, site manager for the RSPB in East Devon, said: “We’ve now had two very cold winters. Dartford warblers rely entirely on insects and spiders and in cold conditions where there’s little to eat they really struggle. And, on top of this they’ve suffered with wild fires right in the middle of the breeding season. This year on Aylesbeare we’ve only had three singing males when last year we had thirteen, and we’re receiving similar reports from other sites.”

Dartford warblers are very much on the edge of their global range in the West Country and conservationists are worried that should Devon experience another bad winter the birds might be lost as a breeding species in the county.

Toby Taylor: “The best we can do is continue to maintain the heathlands in pristine condition and keep our fingers crossed we don’t have another bad winter.”

The RSPB is also calling on people attending East Devon Heath Week, which starts on Sunday 24 July, to look out for the birds.

The RSPB’s Gemma Dunn, who’s helping organise events for the Heath Week, said: “We always get a great turn out for our heath events, and this year we’re really keen to encourage people to watch out for the birds. While we think we know where the remaining birds are there’s always a chance we’ve missed the odd one.”

Gemma Dunn: “Heath week is a great opportunity for us to engage with the local community and show why Heathlands are such special habitats for Wildlife. This fascinating landscape is great for rare and special birds, such as the Dartford Warbler and elusive Nightjar, and also provides wild and inspiring spaces for us humans too.

“Over the 6-day festival, Heath week aims to provide new and exciting ways to experience the Heath by getting up-close and personal with the resident wildlife. So, whether its pond dipping for mini beasts, rambling for reptiles or mountain biking to find Nightjars, we really do have something for everyone. Come along to our opening event, a family festival day at Woodbury castle on Sunday 24 July between 11am-3.30pm to find out more.”

For more details of heath week events and a downloadable programme of events visit http://www.rspb.org.uk/community/ourwork/b/southwest/archive/2011/06/13/east-devon-heath-week.aspx
Posted by Jon Downes at 5:56 PM