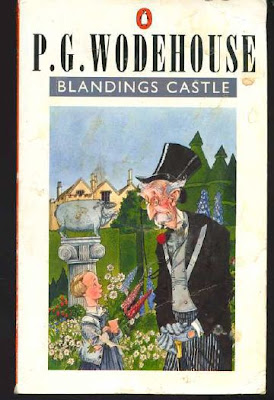 I am re-reading the Blandings Castle novels by P.G.Wodehouse. They are excellent fun, even when one is flu-ridden, and Corinna is collecting them for me two or three each birthday or Christmas. However, last night I discovered something shocking. Clarence, the Earl of Emsworth is one of the most famous `old buffers` in English literature. His Wikipedia entry reads:

He is a long, thin, bald old man with a tendency towards scruffiness, generally found in a worn old tweed jacket and trousers that bag at the knees. He wears pince-nez on a string around his neck, which he nevertheless often loses. He resents being forced to dress up smartly, especially when he is also called on to address crowds, and most of all loathes having to visit London when the sun is shining.
I then find out that he is supposed to be 59; only a few years older than Graham and Corinna, and only eight years older than myself. Hmmmm.
Are we really all within spitting distance of becoming old buffers? Don't answer that one!
Posted by Jon Downes at 11:07 AM