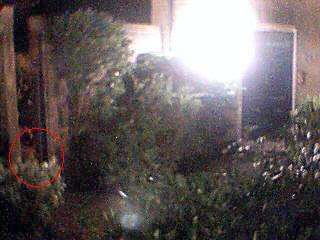 Find attached an image that was sent to me several months back from a chap named Tim, who lives in Dover. He claimed to have caught a large animal on his security camera, but because the image is so vague and distorts the more I zoom on it, I wondered if anyone else could take a look at it. Basically, the witness said that it could have been a large cat - puma - the 'animal' is in the left-hand corner near the gate and only appears as a sandy-coloured head. I believe it to be a fox and because I believe such a photo to be completely useless as evidence, he wasn't too happy and so went elsewhere - as predicted - with his evidence. The image was taken at night, and to me proves that too much of this kind of evidence is being taken seriously, because even if by remote chance this animal is a puma, who really cares when it is so hazy? I attempted, as did the witness, to open the image up on a Word document for better viewing.

Maybe a CFZ reader has a better programme to analyse the still. Let me know what you think
Neil
Posted by Jon Downes at 10:08 PM

Word seems a very odd choice to open a picture. There is plenty of software for images: try PictureIt or Paint.NET. On the other hand, don't bother. No image processing software evr written is going to show anything in this, not if it were run by a collaboration of JPL, the FBI and NASA. And why is the image so lo-res? 15KB seems small even for a security camera, unless it was compressed when it was emailed. Don't waste any time on this one.

If that is the best photo Tim can get from his security camera then I would respectfully suggest that he replaces it with a 1950's Kodak 'Brownie'.
With regard to the image. Using "ArcSoft PhotoImpression 4" which is by no means a top end image editing package (it came FREE with my cheap digital still camera), I got the creatures head enlarged to about 20 times the original size and would definitely agree that it is a fox. The snout does seem a little shortened, but put that down to Tim's low grade equipment. Poor quality lenses often distort the image.

I agree with Syd; even for webcams, that is a bloody lousy camera. Low resolution, spherical aberration, crap focus; the poxy thing exhibits every fault of low-end cheap garbage.

Go out and buy something like a Samsung Techwin camera from somewhere like http://www.buythis.co.uk/ and you can get an autofocus, day/night camera with double the resolution AND decent night vision capability. Pipe that to a recorder or (if you want to get fancy) a computer, and you'll get miles better pictures.

Honestly, I agree with the other comments, the cam is lousy and you really should get a better one.

However, once I saved the picture and blew it up and messed around with the focus and sharpenned it I am pretty sure what's there is nothing more then a common tabby. It was still very grainy and more blob like then I would have wanted but there was enough focus on it along with how short it is compared to the fence that I'm pretty sure it's a cat.