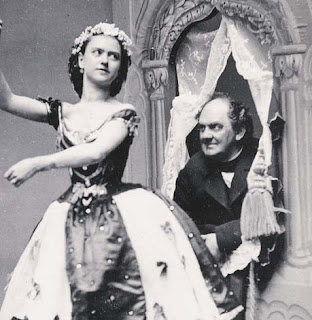 
As is often the case when Barnum was involved in something, the public story of the mermaid was entertaining but ultimately completely false. What really happened was perhaps just as interesting as the one that Barnum had created.

The mermaid was probably created by Japanese fishermen around 1810 and sold to Dutch traders who sold it to an American sea captain called Samuel Barrett Eades in 1822. This was perhaps the first time the mermaid was used in a money-making scam because the Dutch were somehow able to get Eades to pay $6000 for the mermaid; the fact that he sold one of his ships, which he didn't even fully own, to help raise what at the time was a huge price, suggests that the Dutch really must have been claiming that the creature was a real mermaid and that Eades had fallen for the scam hook, line and sinker. Eades was never able to recoup his investment and died in debt whereupon his son sold the mermaid to Moses Kimball for a fraction of the price his father had paid.

Kimball knew a crowd-pleaser when he saw it, and knew exactly where Eades had gone wrong and not drawn the crowds he could have. Eades had not gone to Barnum. Kimball had worked with Barnum on a number of projects and knew that Barnum could come up with schemes to draw crowds like no other. So Kimball and Barnum entered into an agreement where Barnum would lease the mermaid off him for display in Barnum's museum and Barnum could pocket any ticket sales he made from exhibiting the mermaid. Kimball knew that Barnum would hatch a plan to drive his ticket sales through the roof and he would also benefit from this when he displayed the mermaid in his own museum. The money from the lease would also quickly pay off Kimball's investment and then some, without him having to raise a finger.

The plan Barnum came up with was a risky as it was genius but worked perfectly. He started by writing several letters to the newspapers in New York about the mermaid's discovery and arranging to have them sent to the papers from various locations in other states to create the impression that this was a huge news story and generating a real buzz. After the newspapers had fallen for that and began printing the letters, he paid a man named Levi Lyman to pretend to be a naturalist called Dr Griffin from the fictitious British Lyceum of Natural History to turn up in New York with the specimen. Lyman proved to be a good actor and convinced the assembled press that 'his' mermaid was genuine by using the scientific-sounding explanation that every animal on land has a counterpart somewhere in the seas, using sea horses and sea lions as his examples. When Barnum exhibited the mermaid at his museum ticket sales increased threefold and the Feejee mermaid became one of his most famous exhibits.

Since the fire that destroyed the mermaid there have been several occasions where people have claimed to possess the original Feejee mermaid. These claims are all false, however, and bear little resemblance to the original mermaid. The original was fairly small with outstretched arms and a look on its face as if it had endured great pain at the moment of death and there are also accurate illustrations available of the mermaid from its time in Barnum's museum. These illustrations look very little like what we and all the subsequent claimants to ownership of the original commonly expect the mermaid to look like. Somewhere along the line the public image of the mermaid came to be what looks like the mummy of a small child with a fish's lower body and resting fairly peacefully upon its elbows with only a sneer like a haughty heiress in recognition of the pained look the original had.
Posted by Jon Downes at 1:39 AM