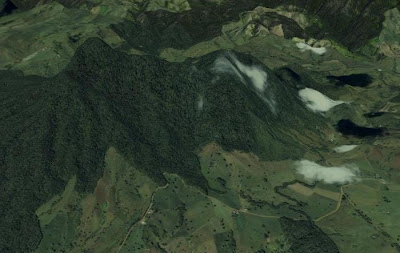 I could not resist a little blog about Min Mins before bed-time. My thoughts were set in train by a book I came across called Great Australian Mysteries by John Pinkney.

The classic Min Min is orange in colour and the size of a small balloon. It bobs along for a time, then vanishes. But Min Mins exhibit a much wider range of behaviours. They may hover in one spot for a long period of time, frequently they chase cars or men on horseback, often they are seen wandering around over cattle.

That is why I mention them here - because they do act like they are very much alive, and if so then surely there cannot be an animal more cryptic in nature. There have been times when they have been seen to congregate in large numbers and that is very animal-like behaviour.

Quoted in the above book is a Frank Silcock who documented more than 500 incidents. For instance there is the Lanahan family in Queensland, who every winter in the 1950s saw a 5-metre Min Min flying around above their stockyard terrifying the animals. On one occasion someone took a shot at it and it shrank to the size of a small red coal, then minutes later
inflated to 5 metres again.

The change in size reminded me of an incident I recorded long ago on the Forteana list, perhaps back in the primenet days. A friend named John Brennan saw a Min min along Middlebrook Road near Millaa MIllaa. At one stage in the encounter it hovered in front of him and shrank to a tiny size, at which point he did what he does to catch flies - he lashed out and snatched it out of the air. Now that is a close encounter!

Another encounter related by Pinkney involved a Bega farmer in 1976 who heard a loud high-pitched whistling noise. He searched and found a bright yellow football-sized globe of
"something" behind a boulder. It was 15cm off the ground and over a 5-second cycle went from yellow to orange and back again. There was no sense of heat but "when I tried to get closer I
could feel my skin tighten and all the hair on my body stand up...It was like trying to walk into a very strong wind." He tried to poke it with a branch but it just slipped away, "like
two magnets opposing each other". The noise was unbearable, then it turned green and faded away as did the sound, leaving "a sweet sickly smell".

Min Mins seem to occur in mineralised regions. Some people have suggested they are some form of electromagnetic phenomenon. That seems to go without saying! As to their nature, I suspect their natural habitat is within the Earth. As we are animals who have arisen out of complexity, so are they. Flying fish would seem weird too if we did not know that they normally live under water. There may be many lifeforms down there, some may emerge to mimic past events and
we think of them as ghosts. Some invisible forms visit us when we sleep or are in a trance and we call them spirits.

I emphasise 'may.' This is something we humans do not know about yet, but it does not mean that we cannot know.

Image: FatherClancey.jpg Mt Father Clancey is a dormant volcano with mineralisation on its eastern flank. Middlebrook Rd meanders across the foreground. Apart from the orange orb that emerged from the dense rainforest here, I have also reported a possible juvenile bunyip - or was it a very lost penguin? - and I and 3 other witnesses including a sceptic all heard distinct fairy singing near Phantom Ck on the far side - crypto stories for another day.
Posted by Jon Downes at 10:55 AM

Something I have never heard of before. Thanks

A couple of things occur to me here: firstly that these sorts of lights are far from unknown and are actually quite common up in the Pennines. Pendle in particular had a reputation for being absolutely thick with strange lights, mysterious happenings and peculiar flying things; Lothersdale and similar areas were also so active that radio hams who frequent the carpark up on the Old Skipton Road because of the good receptivity up there knew them as "Flying oranges".

Secondly, defining intelligent behaviour on the part of a glowing, flying thing is actually quite difficult. A lot of this so-called intelligent behaviour could be explained away by the things being affected by anything which affects the local magnetic or electromagnetic fields. Were this the case, then, accounts of the things following animals are explainable since an animal is little more than a large amount of salty water in one place, electromagnetically speaking. Cars, also, should strongly affect this phenomena since a tonne or so of ferromagnetic and conductive metal is going to seriously upset the local magnetism.

I haven't seen one for years and had forgotten about them until I saw this article.
I grew up on a farm on the Bogan River in Central New South Wales. After school I regularly did a shift on the tractor ploughing at night to give Dad a break. I saw them occassionaly. They definitely acted like something alive and sometimes cast a shadow. Colours varied from a pearl white to a deep orange. The tractor was making a lot of noise so I cannot verify if they made any sound.
When I first saw them I asked my father and he said there was stranger things than them out there. Like other bush blokes he didn't talk about what he saw but he knew what I was talking about.