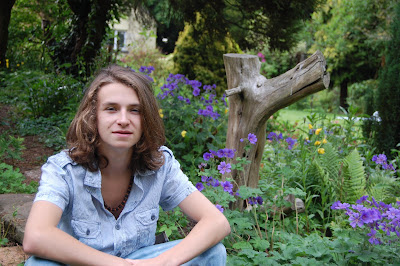 Are you seeing a pattern developing here: long hair, boyish good looks? And we are not just talking about Jon. We have Max; Dave has grown his hair; and now Tristan, who writes: "Hello, I'm a fifteen year old animal and rock freak, that loves being outoors, observing nature! I'm home educated so I have plenty of time to do stuff that most people wouldn't consider 'education,' even though I've learnt far more from being outdoors and thinking for myself (instead of being cooped up in a classroom,being taught instead of learning). I hope one day to be finding new beasties and conserving known ones so I thought it might be a good idea to blog for the CFZ!" With Jon's wild hair and beard the CFZ is rapidly beginning to resemble a fortean version of the Manson Family. Fleur as `Squeaky` anyone? Welcome aboard Tristan...


First of all, I would like to thank Jon for letting me partake in this wonderful blog. And now that summer is starting I'm sure there will be plenty of fortean phenomena going on this year.

Anyway, to the blogging.

Today we will be looking at some unexpected cryptids: sparrows. I first came across these little guys (and gals) when me plus mum were at a smallholding doing some sheep shearing and such-like in south-west wales, where I lived at the time. The owners of the smallholding were rather blasé about them as they thought they were just rather pretty but average birds.

They did look like an average house sparrow, or not dissimalar to the rarer tree sparrow, except that, whereas on a normal sparrow areas would be grey or brown, the colouration was replaced by a reddish brown. I was pretty shocked when I first saw a red sparrow but as I was around twelve at the time I didn't have enough scientific discipline to think of taking photos or behavioural notes. But I did compare them to Italian and Spanish sparrows; and still no match to what they were.

But hopefully one day I'll be able to get some photos of them and then you can realise that I'm not completely loony, talking about red sparrows. But if anyone else has seen similar birds I would be very interested to hear from you. Until next time; keep watching the hedgerows.
Posted by Jon Downes at 11:51 AM

Hey Tristan, whereabouts in South West Wales? I'm regularly in that part of the world.

We used to have a few albino and partial albino sparrows where I live in Didcot, Oxfordshire. That was many years ago now, and I never thought to try getting a photo.

hey,
it was near pendine (the ex racing sands) if your interested in having a look then i'll give you more details.would be great if you could get a photo of one :)