THE LONESOME DEATH OF MISTER LIZARDMAN

It was my friend and mentor (and - while we are at it - the nearest thing to a father I have left in this world), Tony 'Doc' Shiels first introduced me to the concept of psychic backlash. Indeed, I often think that it was probably him who first coined the term. Indeed, it was me who first coined the term 'Zooform Phenomenon' and my mate, Ismael Aguyao who first described the bipedal quasi-vampire of the Canovenas Plateau in Puerto Rico as the goatsucker or chupacabra (although it seems the term was in existance as an abusive one beforehand); so the idea that a bloke you know can coin a term that has taken its place with pride amongst the canon of Fortean literature is not that surprising.

In my book Only Fools and Goatsuckers I wrote:

'Tony Shiels is probably the most powerful and wisest man that I have ever met. He has the power to summon up monsters. Although I go looking for them, I would never attempt to emulate him in his invocatory activities because by the laws of magick once you cause something to happen you have to be responsible for the consequences and whilst I can deal with the consequences of looking for something like the chupacabra and even of chronicling its activities and drawing some tentative conclusions as to its nature I cannot take the responsibility for summoning it to appear before me like a rabbit out of a hat. Indeed, I very much doubt whether I have the power to do so.

One thing that I do know about monster hunting, however, is that those who practice it are susceptible to what “Doc” has called “Psychic Backlash”. This is a series of inexplicable and horrific outbreaks of bad luck that can overtake the hapless seeker after monstrous truth on his way to his goal. I never believed in it until, during the months that I was working on The Owlman and Others, two of my pet cats died suddenly, two computers blew up (as did two cars) and my wife left me.'

I wrote those words eleven years ago and nothing that has happened since has done anything to make me feel like changing my mind. Psychic backlash is a very real phenomenon and is the reason I don't really follow the "animals" of the left-hand path anymore. The game, to use Graham's wonderful phrase, which I think he stole from a Billy Bunter story, just isn't worth the candle.

And the news story to which I have linked at the top of the page hasn't done anything to change my mind either. 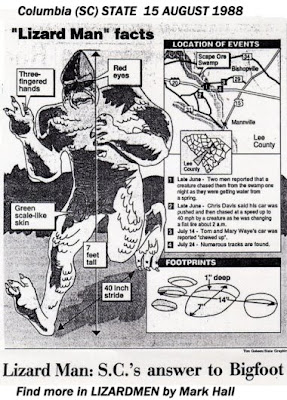 The Lizard Man of Scape Ore Swamp (also known as The Lizard Man Of Lee County) is a humanoid cryptid which is said to inhabit areas of swampland in and around Lee County, South Carolina. It is described as being seven feet tall (over 2m), bipedal and well built, with green scaly skin and glowing orange eyes. It is said to have three toes on each foot and three fingers on each hand, which end in a circular pad on them that stick to walls. The creature has an incredible degree of strength, more than capable of ripping into a car.

The first reported sighting of the creature was made by Christopher Davis, a 17-year-old local, who said he encountered the creature while driving home from work at 2 a.m. on June 29, 1988. According to his account, Davis stopped on a road bordering Scape Ore Swamp in order to change a tyre that had blown out. When he was finishing up he reported having heard a thumping noise from behind and having turned around to see the creature running towards him. Davis said the creature tried to grab at the car and then jumped on its roof as he tried to escape, clinging onto it as Davis swerved from side to side in an effort to throw it off. After he returned home, Davis's side-view-mirror was found to be badly damaged and scratch marks were found on the car's roof - though there was no other physical evidence of his encounter.

“I looked back and saw something running across the field towards me. It was about 25 yards away and I saw red eyes glowing. I ran into the car and as I locked it, the thing grabbed the door handle. I could see him from the neck down – the three big fingers, long black nails and green, rough skin. It was strong and angry. I looked in my mirror and saw a blur of green running. I could see his toes and then he jumped on the roof of my car. I thought I heard a grunt and then I could see his fingers through the front windshield, where they curled around on the roof. I sped up and swerved to shake the creature off.”

In the month that followed the Davis sighting there were several further reports of a large lizard-like creature and of unusual scratches and bite marks found on cars parked close to the swamp. Two weeks after the Davis sighting the sheriff's department made several plaster casts of what appeared to be three-toed footprints - measuring some 14 inches (360 mm) in length - but decided against sending them on to the FBI for further analysis after biologists advised them that they were unclassifiable.

And after that the legend fizzled out, although Davis was a minor celebrity who appeared on paranormal TV shows, where he talked about his experience, on and off for the next two decades. But apparently this new-found fame brought him no happiness and now he is dead - the victim of a drug-related shooting. As the Sumter Item reports:

Davis served as a grand marshal at a festival parade and signed T-shirts at a mall in Myrtle Beach, he said. "At that time, he was super, nice kid," he said. "You know, I bet he told the story more than 100 times every week for several weeks." Truesdale said he believes the media attention and publicity became too much for him."He could have made a mint from this," Truesdale said. "A lot of people don't know that he was scheduled to go to the Oprah (Winfrey) Show, but he cancelled it. I think finally he just had enough."'

Bad luck does tend to haunt those who encounter monsters. It has done me no good in my life, it has adversely affected Tony Shiels and I can think of a dozen other folk who have got too close to one of these dark zooform shadows, and it has ruined parts of their lives for a time at least. Killing someone? Probably not; but screwing your head until the only way out is narcotic and then leading someone into a drug-soaked hell? Been there, done that, got the tee shirt. It's just that my druggy associates didn't have guns.

Is this Psychic backlash at work or just another victim of an increasingly unstable and screwed up society?

We shall never know but this underlines my decision even more. To the people who want me to go back and write another book about Owlman, or even worse, to get involved in some half-arsed scheme to do a seance to summon it up, the answer is NO!


(Not unless you pay me a hell of a lot more than I usually get paid, because each man has his price, and mine is not as high as you might think)
Posted by Jon Downes at 5:23 PM

Although the circumstances that caused you to write about this aren't very nice (being murdered over drugs, what an pitifully pointless way to go), thanks for doing so. Very interesting article just at the moment I've been reading about the Ohio River's "Green Clawed Beast" and the Loveland Frogman. I wonder if they might not be related to the lizard man.

If you want to read a cracked English-to French-back to English translation of this article, go to http://literatureonline.quebecblogue.com/ and scroll down. It's . . . Bizarre!