IF THIS IS TRUE.. 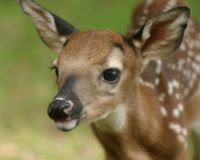 If this is true, it is another example of the increasingly mindless beaurocracy of governments, especially in the UK or the US; governments that follow the letter of the law rather than its spirit and as such, take mindless, idiotic and often cruel decisions.

If this is not true, it is equally as interesting, because it is indicative of the increasing loss of faith in organised governments across the western world.

'An orphaned deer in Ohio was rescued by a compassionate woman about three weeks ago, who took it to her home in Kentucky. The fawn was crying continuously, so the woman started to bottle-feed it. The local community decided to find a permanent home for the fawn and started e-mailing friends to find a suitable permanent home for it. Finally a rescue and rehabilitation farm for wild animals in Kentucky was identified and the fawn was sent to the farm.

This was where this charming story turned into an example of "no good deed goes unpunished." The woman who rescued the deer was informed by the Ohio Department of Natural Resources, Division of Wildlife that the faun had to be returned to the wild (presumably so that it could die a natural death by starvation).

After the division of Wildlife was not able to intimidate the woman into doing this, they then started threatening her with 60 days jail time and a fine unless the fawn was handed over to them so that they can euthanize it and do post-mortem tests for diseases on it. They contend that she has broken the law by

(1) removing the fawn from it's natural habitat instead of leaving nature to run its course and
(2) transporting the deer over state borders.

I ask members to please petition the Ohio State governor to stop this persecution of a good samaritan, and to rather use it's financial resources to test the baby deer while it is alive, and should it come back disease free, to release it either to the farm where it is currently happy, or release it, after it has been weaned, into a sanctuary.Your support is needed urgently!

http://www.thepetitionsite.com/1/save-Bambi-now
Posted by Jon Downes at 10:14 AM