`CAUSE IT'S WITH YOUR MUSSELS THAT YOU MOST EASILY OBTAIN KNOWLEDGE 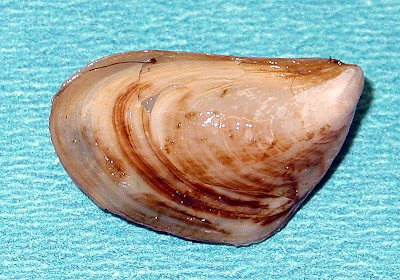 ZEBRA MUSSELS HANG ON WHILE QUAGGA MUSSELS TAKE OVER

Research conducted by Suzanne Peyer, a doctoral candidate in the University of Wisconsin-Madison Department of Zoology, shows that physiological differences between the two species might determine which mollusk dominates in either calm or fast-moving waters.

"Zebra mussels quite rapidly colonized rivers close to the Great Lakes right after their introduction, within a year or two," Peyer explains. "Quagga mussels were introduced in the Great Lakes around 20 years ago, but they are still not found in the rivers or tend to be present in low numbers."

The mussels are similar in many ways. Their habitats overlap, and both are suspension feeders that filter water to extract their food. But the cousin species are different in many ways, too. Zebra mussels prefer to attach to a hard surface, while quagga mussels can live on soft bottoms, such as sand or silt. Zebra mussels also prefer warmer water temperatures and do not grow as big as quagga mussels.

Peyer's research focused on the ability of the mussels to attach to underlying material. Both species attach to rocks, sand, silt or each other by producing tiny but strong "byssal" threads, string-like strands of protein. These threads act as an adhesive that enable the mussels to attach to surfaces, regardless of how slippery the surface is. Byssal threads are the reason mussels are so difficult to remove from boats or water intake pipes.

Peyer collected both mussel species from Lake Michigan. In the lab, she subjected the mussels to different water velocities that simulated river flow conditions. Her research results supported her hypothesis that zebra mussels are able to produce more byssal threads than quagga mussels, enabling them to attach more securely to underlying material. They are also better able to hang on where water is flowing, such as in a river or stream.

"The results were that zebra mussels produced byssal threads at about twice the rate of quagga mussels," Peyer says. "Zebra mussels can ramp up their byssal thread production under different flows."

According to this model, the zebra mussels show high plasticity, or the ability to adapt to changing environmental conditions. Plasticity can be an adaptive characteristic that allows an organism to survive under new conditions. In this case, the new condition is increased flow.

Results from her research, funded by the UW-Madison Sea Grant Institute, is published in the July 1 issue of the Journal of Experimental Biology.

According to Peyer's research adviser, Professor Carol Eunmi Lee at the UW-Madison Center of Rapid Evolution, no one has previously looked at differences in attachment between these species as an explanation for their distribution patterns in North America.

"It's the first time somebody actually went and systematically looked at functional differences between the two species that would explain the different kinds of substrate that they could invade," she says. "In that sense, Suzanne has produced a really elegant and clever study. It has very concrete hypotheses and results."

Zebra mussels were first introduced in the Great Lakes in the late 1980s, hitchhiking their way into North America in the ballast water of ships from the Caspian and Black Seas. Within a few years, zebra mussels had colonized shallow water, beaches and water-intake pipes in layers up to 8 inches thick. Although quagga mussels came onto the scene a few years later, they have recently become the dominant species in calm waters of the Great Lakes.

These mussels have permanently changed the ecosystem. Before the mussels invaded, Lake Michigan water was mostly cloudy and millions of tiny microorganisms provided a food base for fish. Because the mussels filter the microorganisms, the waters today are surprisingly clear, allowing light to penetrate to greater depths, which in turn promotes prolific, nuisance algae blooms.

Quagga mussels may be the reason Diporea, a small shrimp-like species that serves as a food source for larger fish, is no longer abundant. The whitefish that feed on Diporea are growing to less than half of their expected size.

Both Peyer and Lee hope that understanding the biological differences between the two mussel species will help those who manage the Great Lakes.

"We need to be aware of the distinct differences between the two species," Peyer says. "If we understand the differences in their biology, we might help to make management more efficient and more effective in the end."

Email ThisBlogThis!Share to TwitterShare to FacebookShare to Pinterest
Labels: mussel, out of place animals, quagga mussel