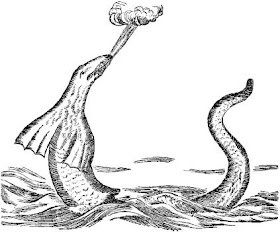 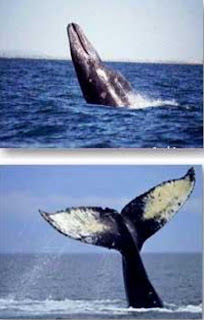 Richard Muirhead mentioned this classic Sea-Serpent sighting recently. I said in reply that this was a favourite topic of Charles Paxton and we had discussed the matter at length. Paxton felt that the animal which was sighted (NOT by Hans Egede but by his son, and not in Greenland but on a voyage headed to there) was a gray whale, an animal which subsequently went extinct in the North Atlantic but which remains well known off the Pacific coast of North America. Paxton gu 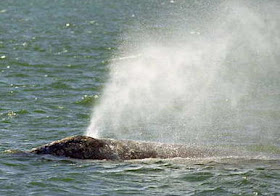 essed that the "Tail" which was reported was the animal's penis. And he said the drawing was probably of no value in depicting the sighting (Paxton's website should still be up on the internet)

On the contrary, I thought that the drawing was a plausible enough depiction of a gray whale, and showed how the different aspects of the sighting could be matched againstmodern photos. In the case of the tail I even noticed that the shape that was drawn was a fair depiction of ONE fluke of the tail (Only). Presumably the tail was viewed briefly and from such a position that it appeared to be folded over.

So it boiled down to yet another fleeting sighting of an unrecognized but known animal. No need to make any extra special conditions or make any special arguments over it. Hundreds or even thousands of water-monster sighting the world over and throughout history fall into that description.