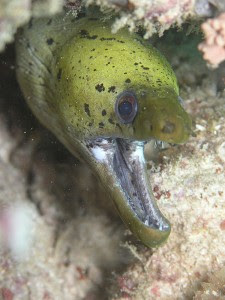 When it was captured seven miles off Bermuda in 1902, a previously unknown eel-type creature was described as a genuine sea monster in sensational newspaper reports which appeared across America.
The live six-foot “sea serpent” — described as having “a warlike appearance” [not unlike the moray pictured at left] — was shipped to the New York aquarium so scientists could study it.
When it arrived in Battery Park facility in July, 1902, the “New York Times” carried a major report breathlessly headlined: “REAL SEA SERPENT IS HERE AT LAST; Uncanny Creature a Prisoner in the Aquarium. Sent from Bermuda by Prof. Bristol, Who Never Saw Its Like and Does Not Know How to Class It.”
“In tank number three of the south ground floor of the aquarium, there was deposited there the strangest creature the authorities of that institution have ever been called upon to take care of,” read the “Times”  July 2 report. “The creature, which may be a snake or a moray or a deep sea eel or a sea serpent, arrived on the Quebec Line steamship ‘Trinidad’ and was sent north by Professor Charles L, Bristol, Professor of Biology at New York University, who is at present in Bermuda securing rare piscatorial specimens for the aquarium.
“The creature is about six feet long, has a reptilian head, the head of a moray, and the tail of a fish. Its body is of a rich brown, striped or spotted at regular intervals with beautiful bands and spots of a light yellow. That it is very much alive is shown by its lively movements in captivity.”
Read on..
Posted by Jon Downes at 1:34 PM