MUIRHEAD` MYSTERIES: SOME ODD COLOURED MOLES IN AN INVERNESS MUSEUM 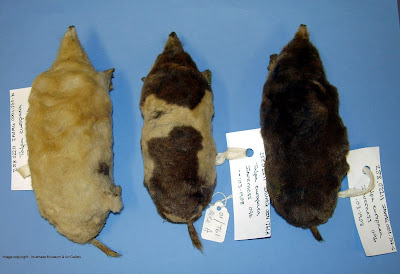 The other day I found the following story from 1987 in my archives concerning unusually coloured moles. It is from The Guardian`s Country Diary column which only yesterday (Monday July 25th) turned up an interesting butterfly story from Suffolk. Anyway, here we go:

INVERNESS:While looking at specimens in the storage rooms of the Inverness Museum and Art Gallery, I was shown a box containing three mounted moles. You could expect to find such things in a museum; but not a black mole, a white mole and a piebald mole. The white fur on two of the specimens was slightly creamy, but I guessed this was fading with age and originally they had possibly been an albino and a partial albino. Unfortunately there was no information about date or origin, and I could find no mention of colour variety in my reference books.The museum kindly lent me the three specimens, and on my monthly field trip with BBC Highland I asked for informa 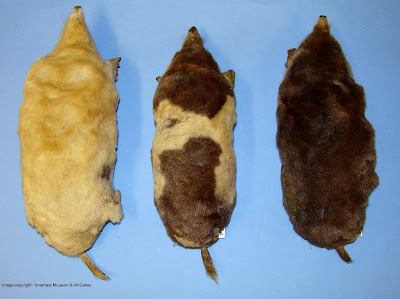 tion about the three moles and whether anyone had seen any colour variations. We were delighted with the response: a few people telephoned the museum and a small number handed in information. One person thought the three specimens had been caught on the Ness Castle Estate in 1926. Apparently such colour forms are not unusual in the area. Others said they ad occasionally seen white moles.Two weeks later someone brought in a golden yellow mole found at Ness Castle Estate; it had white fur , tipped with golden yellow. It was back to the books again, and at last I did find a reference in A Vertebrate Fauna of the Moray Basin by Harvie-Brown and Buckley, published in 1895. They had a few records of not only white specimens but also grey and a form with “ pale yellow bellies.” Most records were from the Inverness area but there was one albino from Sutherland. It seems therefore that colour variations in the mole are a lot commoner than I for one had believed. RAY COLLIER (1)

Jeanette Pearson of the Inverness Museum and Art Gallery wrote to me on July 26th “ I have taken an image of the moles for you, they are from our early collections so the data on them is not as full as it might be. The accession number is INVMG 0001.761. Unfortunately I do not have details about findspot or date they were caught. The three moles came into the museum as a mount”.(2)

The accompanying photo(s) of the moles appear courtesy of Inverness Museum & Art Gallery.

According to `A History of the Earth and Animated Nature vol 3 1816: “ The mole is scarcely found, except in cultivated countries: the varieties are but few. That which is found in Virginia resembles the common mole,except in colour,which is black,mixed with a deep purple. There are sometimes white moles in Poland, rather larger than the former. As their skin is so very soft and beautiful, it is odd that it has not been turned to any advantage. Agricla tells us,that he saw hats made from it,the finest and the most beautiful that could be imagined. (3)

On `The Hunting Life Forum March 10th 2011 someone calling him/herself Moley wrote: ( UK but location unknown). “Over the years i have had quite a few odd coloured moles , about 6 albino,s, 1 brown ,probably about 12 silvers and quite a few with a white under fur and almost black tips, i have also had 2 ginger rats , i,ll have to sort some pics out “)