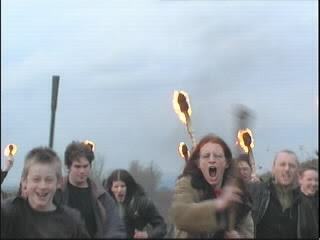 EDITOR'S NOTE: Guess where most of my best forgotten 1999/2000 Owlman movie was filmed, including all the nudie bum bum bits and the pointlessly violent bits.
Yup. You've guessed it. Haldon Hill

During early September I appeared on Coast To Coast AM with George Noory for the second time. Coast To Coast AM is one of the United States biggest radio broadcasts,
and in the past monster hunters such as Jon Downes and Nick Redfern have been invited on. The great thing with the show is that millions of listeners tune in and the show can be heard in any of the states. The biggest buzz of doing the show is the feedback during and after the show. I received calls from as far as Canada and China. However, despite the reports of Bigfoot, serpents and even a troll (!), the most unusual call I had concerned a chap from merry ol’ England. This is his story:
‘OK, before I report this I want you to no I’m in no way over the top, crazy, or mad…but one night while driving home from Exeter to Torquay on the A38 a couple of years ago I saw a large winged creature. I had just got to the top of Haldon Hill and as I came to the top of the hill something swooped down and flew up and over my car so close to my windscreen you could have fit a Rizla paper between it! The only way I can explain how these wings looked was the same as how bats wings are but much bigger! The wingspan was wider than my Honda Civic 1.5, I’d say each wing was about 2 .5 metres across.
'I’m seriously not the sort of person to come forward about this type of stuff, I kind of dismissed it until I heard you on Coast To Coast saying that many people had seen things like this. I hadn’t heard of anyone else who had reported this until now so felt I should share with you what I saw. The area I saw this has a lot of thick dense woods….and I mean miles of woods.’
I was immediately intrigued by this report. Was Owlman doing the rounds ? Had Mothman taken a trip to UK shores ? Or had a Batman entered the fray ?
I briefly interviewed the witness, who did not want to be named, and he stated categorically this was no bird or bat. According to him the encounter had taken place two Novembers ago. The witness commented, ‘On that drive I was stressing out about how I was going to raise money for presents. When I saw it I reacted with fear and put my foot down and got to the nearest town, which is Newton Abbot. I was the only car on the A38.’
I asked him for a better description of the creature to which he replied, ‘I know this sounds dumb but the only way I can describe what I saw is like the monster from the movie Jeepers Creatures (in the film a humanoid creature with a huge set of leather wings picks off motorists).’
I mentioned to the witness the reports of Owlman but he stated, ‘The wings were more like a bat, too wide for an owl. I didn’t see the head as it was too fast but the wings reminded me of a pterodactyl. It literally swooped over my car and the car shook, similar to when a lorry goes by on the motorway. I was doing about 65 mph and I wish I’d stopped but at the time my heart was pumping. This thing was more reptile-like in its skin texture and the colour was a beige-brown.’
Although the witness continues to use that stretch of road he has had no further encounters.
So, is the dreaded Owlman around, or some sinister relative from the ethereal?
Posted by Jon Downes at 12:55 PM