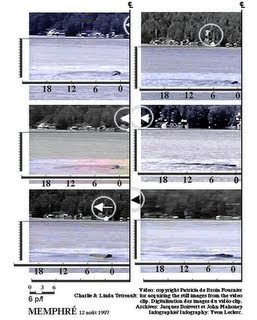 Lake Memphremagog is a long finger-like freshwater glacial lake located between Newport, Vermont, United States and Magog, Quebec, Canada. The lake is 27 miles (43 km) long and its maximum recorded depth is 285 feet (87 m). Local legends talked of a sea serpent in its depths and the indigenous peoples told settlers not to swim in the lake. The creature was described by Norman Bingham in his novel, The Sea Serpent Legend, in 1926. In the book he revives old legends :

They saw a monster dark and grim
Coming with coiling surge and swim,
With lifted head and tusk and horn,
Fierce as the spirit of Hades born.
(Bullock, 1926 p. 71)

On January 21, 1847 The Stanstead Journal newspaper reported "I am not aware whether it is generally known that a strange animal something of a sea serpent....exists in lake Memphremagog." There have been over 215 documented sighting of the sea serpent called Memphre since 1816. Most of the witnesses describe the creature as a long, black or dark green serpent or reptile swimming near or on the surface of the water.

Here is a selection of sightings:

You will find a complete list of sightings from 1816 to 2003 on this site run by Barbara Malloy who has seen the creature : http://www.memphreusa.com/

Some of the sightings sound like a seal or manatee, others like a giant eel. Something has been seen by too many people to be ignored, that is certain.