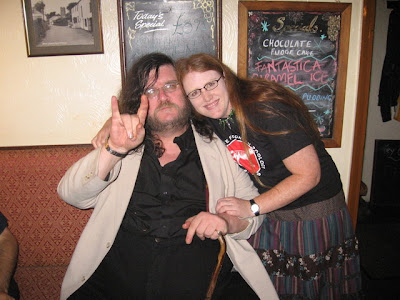 Who is this cute redhead? And why is she snuggled up to the Director of the Centre for Fortean Zoology, who actually looks completely slaughtered, when in fact he is just tired?

It was the evening of the WW Sunday Dinner 2006, and I (I've had enough of trying to recount this story in the third person) was absolutely cream-crackered after what is always the most exhausting weekend of the year.

The girl is Tania Poole, an Australian pagan and fortean who was kind enough to say extremely nice things about us all after attending the event. 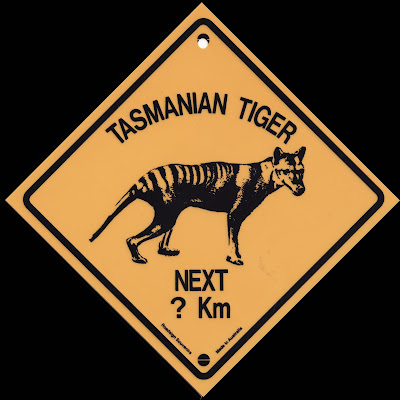 Indeed, by the end of the weekend she had joined the ranks of `Uncle Jon's girls` - an unofficial melange of young ladies who seem to take pity on this cynical old hippy, and help his long-suffering wife look after him whenever his manifold physical, psychological, and personality failings let him down.

She went back to Oz a few days later, and although we have heard from her by email, and indeed she has even written for the bloggo, we haven't seen her since.

However, out of the blue a day or two ago came a parcel from her. As you may remember, I attained my half-century a couple of months ago, and am now officially in the old git brigade (although, if I am to be brutally honest, and there is no other 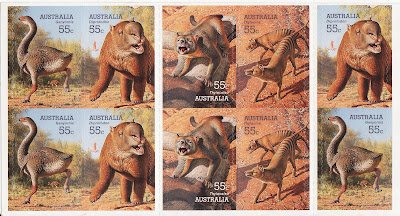 kind of honesty, really, I have been an old git for years). However, I digress, but regular readers of the bloggo will be used to that. The last thing that I was expecting as I unwrapped my post that morning was an affectionate letter from Tania, together with two lovely birthday presents (pictured on the left).

The stamps will take pride of place in the crypto album, and the yellow roadsign has already been affixed to

the office door together with the `Beware of the Chickens` sign that Oll gave me for the same birthday.

I am feeling extremely touched. Thank you, my dear, for being so kind to an ageing cryptodude. It means a hell of a lot to me, and I really do appreciate it. It is at times like this that I realise that my efforts to make the CFZ a truly global family, are 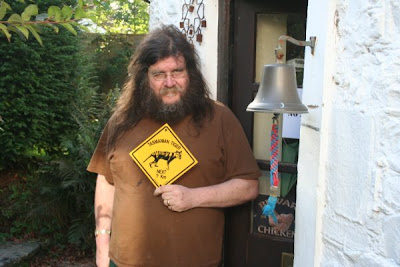 Truly there is a corner of a foreign field that is forever Woolsery.
Posted by Jon Downes at 11:08 AM