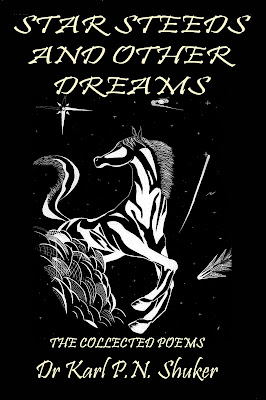 Today Dr Karl Shuker is a world-renowned author on cryptozoology and animal mythology, with over a dozen books and countless articles to his name, but long before his first book on such subjects had been published he was already a prolific poet. Yet in stark contrast to his continuing output of scientific writings, his poetry has remained largely unseen by the outside world – only his family, friends, and selected colleagues have ever read any of his very sizeable collection of poems…until now.

At last, after having been hidden away for many years in a couple of dusty folders, a rich selection of Dr Shuker’s poems has finally been compiled, enabling the CFZ Press to present this world-exclusive to his many fans and poetry readers in general. Just as his non-fiction writings have documented a wide range of subjects, so too do Dr Shuker’s verses – from the wonders of the natural world, and the mysteries of other worlds far beyond our comprehension, to deeply personal recollections and contemplations of his past, present, and future, his faith in God, and also a series of poems written especially for children.

Welcome to a world of star steeds and nightingales, childhood’s end and silent farewells, realms of dreams and shadows, memory’s mirror and ghosts from the past, Faerie worlds and flying horses, the voice of the winds and the music of the spheres, roses and rainbows, airports, angels, balloons, butterflies, clowns, dragons, elves, fireworks, monasteries, poppies, Stonehenge, tattoos, UFOs, unicorns, and much much more. Even Nessie, the Loch Ness monster, makes an appearance.

All of these and many others too await your company within the pages of this very different but truly delightful book by Dr Shuker, offering its fortunate readers a fascinating, unique glimpse of a alternate line of literary evolution equal to but hitherto overshadowed by his cryptozoological writings. So let his star steed transport you right now to a magical, enchanting world that only poetry has the power to create, deep within the glorious infinity of our own imagination.