LINDSAY SELBY: One for Hallowe'en 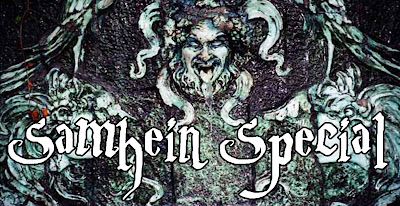 Zombies, a favourite of horror movies, have a basis in fact. There are stories in folklore about people being poisoned and thought to be dead and then seen working. This article is a study by a scientist who explored this and came to the conclusion that zombies do exist. So watch out this all hallows eve...who knows what may be lurking in the shadows!

Zombies: do They Exist?

Yes, says a Harvard scientist, who offers an explanation.On a brilliant day in the spring of 1980, a stranger arrived at L'Estère marketplace in 's fertile . The man's gait was heavy, his eyes vacant. The peasants watched fearfully as he approached a local woman named Angelina Narcisse. She listened as he introduced himself, then screamed in horror—and recognition.

The man had given the boyhood nickname of her deceased brother Clairvius Narcisse, a name that was known only to family members and had not been used since his funeral in 1962.This incident and four others in recent years have sparked the most systematic inquiry ever made into the legendary voodoo phenomenon of zombiism. According to Haitian belief, a zombie is an individual who has been "killed" and then raised from the dead by malevolent voodoo priests known as "bocors."

Though most educated Haitians deny the existence of zombies, Dr. Lamarque Douyon, Canadian-trained head of the in , has been trying for 25 years to establish the truth about the phenomenon, no easy matter in a land where the line between myth and reality is faintly drawn. More recently, Douyon has been joined in his search by Harvard Botanist E. Wade Davis.

Next month is publishing a paper on his findings in the Journal of Ethnopharmacology. His startling conclusion: "Zombiism exists and is a societal phenomenon that can be explained logically." Douyon set the stage for ' study by foraying into rural , where he met with purported zombies and fearsome bocors. At least 15 individuals who had been branded zombies by terrified peasants turned out to be victims of epilepsy, mental retardation, insanity or alcoholism.

The case of Clairvius Narcisse, however, gave Douyon good evidence. Medical records showed he was declared dead in 1962 at , an American-run institution in Deschapelles. Yet more than 200 people recognized him after his reappearance.The best explanation, Douyon believed, was that Narcisse had been poisoned in such a way that his vital signs could not be detected. The psychiatrist obtained a sample of a coma-inducing toxin from a bocor. The poison is apparently used to punish individuals who have transgressed the will of their community or family. Narcisse, for example, said that he had been "killed" by his brothers for refusing to go along with their plan to sell the family land. Ti-Femme, a female zombie also under study by Douyon, had been poisoned for refusing to marry the man her family had chosen for her and for bearing another man’s child.

Douyon sent a quantity of the zombie potion to the , where it came to ' attention. An expert on tribal uses of plants, flew to and began collecting his own samples. "The principal ingredients are consistent in three of four localities," he reports in his paper. Several plants containing skin irritants are used, a charred human bone is thrown in just for show, but the active ingredients are a large toad (Bufo marinus) and one or more species of puffer fish.

The toad, reports, is a "veritable chemical factory," containing hallucinogens, powerful anesthetics and chemicals that affect the heart and nervous system. The fish is more potent still, containing a deadly nerve poison called tetrodotoxin. To learn how these poisons might relate to zombiism, turned to an unlikely source: Japanese medical literature. Every year a number of Japanese suffer Botanist Davis tetrodotoxin poisoning as a result of eating incorrectly prepared puffer fish, the great delicacy fugu. found that entire Japanese case histories "read like accounts of zombification."

Indeed, nearly every symptom reported by Narcisse and his doctors is described, from the initial difficulty breathing to the final paralysis, glassy-eyed stare and yet the retention of mental faculties. In at least two cases, Japanese victims were declared dead but recovered before they could be buried. Japanese reports confirmed what was told by the bocors: the effect of the poison depends on the dosage; too much will kill "too completely," and resuscitation will be impossible. Even with the correct dose, the bocors said, a zombie must be exhumed within about eight hours or will be lost, presumably to asphyxiation. How zombies are revived from their deathlike comas remains a mystery. Both Davis and Douyon heard stories about a graveyard ritual in which the bocor pounds on the earth and awakens the victim, but neither was able to witness it.

did learn that upon reviving, the zombie is force-fed a paste made of sweet potato and datura, a plant known to Haitians as zombie cucumber. Datura, says , is "one of the most potent hallucinogenic plants known." Thus the zombie is led away in a state of intoxication, usually to work as a slave. Narcisse, who spent several years as a slave on a sugar plantation, reports that zombies do not make very good workers. Says he: "The slightest chore required great effort." He reports that his senses were so distorted that the smallest stream seemed a wide and unfordable sea, as though "my eyes were turned in." has sent samples of the zombie potion to laboratories in Europe and the , where in one experiment it induced a trancelike state in rats.

Such research in the past led to the discovery of curare, an arrow poison from the Amazon now used to paralyze muscles during surgery. Tetrodotoxin may also one day find its place in the medical armamentarium. "People who have lived in the tropics for centuries have learned things about plants and animals that we have not fathomed," says Richard Evan Schultes, head of Harvard's renowned . "We must not leave any stone unturned, or their secrets will be lost."