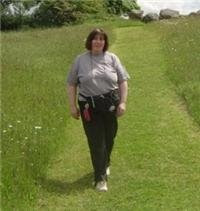 We have been in contact with Jan for ages, and it is with great pleasure that we welcome her aboard, not only as a guest blogger, but as a Co. Durham representative for the CFZ. With Davy Curtis already at the helm in the county, the two of them will make a dream team par excellence....

We saw a Thing the other night. Not sure at all WHAT it was, but both myself and Gareth saw it. We were driving back from Darlington to home at about 10pm on Wednesday 7th October, and just west of Harperley roundabout on the A698 to Wolsingham, when “it” flew in front of the car.

Whatever it was, was not a bird, and was not a moth or bat. It was approx. 3 feet long, about 1ft wide at the head, tapering down to a short tail. It was white and almost see-through – like a cloud, perhaps – pear-drop shaped, and moved very fast.

It rose from a hedge (or from the ground close to the hedge), which borders the road. Then it sped across the road at about 30ft high. Not sure how fast it was going, but a few mins later we saw a tawny owl flying across the road, and the Thing was much faster than the owl.

Before anyone gets the wrong idea, I am not suggesting that the Thing and the owl were connected in any way. It was incidental and only serves as an indication of air-speed.

The site we saw it at was close to the POW camp, which has recently been put up for sale on ebay. There are no street lights nearby, and it is a remote area of the high north Pennines. Very few dwellings, not much human activity, other than the fairly quiet A689. There was very little wind, and it was quite dark as it was cloudy/overcast. No rain.

If there was a light source in front of the bag then it would produce a transparant effect.

Yes, I wondered about that myself... was bigger than a supermarket plastic bag, but I still thought it might be. But there was hardly any wind, and it was moving really fast.
Still puzzled.

Hi,
I had sent in a story about our sighting to another blog site (http://naturalplane.blogspot.com/2009/08/mailbag-mother-and-son-witness-flying.html) and have since seen the same thing flying by in different directions always at a fast speed and once even travelling from above and falling quickly into the ground. I've looked all over the web for something similar but have found nothing so far. However I had suspected that more sightings might come to light quite soon. I'm going to try and catch this thing on digital camera.
Thanks for the post.
Pema

Your not crazy. I just filmed a cloud (zoom in) and
Stay in one spot for 10 minutes. The cloud is FULL of many creatures..they are for sure alien. I wounder if
Thats why they (Chem Trails) planes are spraying. Some look Demon and very scary.
Im afraid to show video. Gary james 2465 at gmail dot com. Remove spaces