Giant crocodile films are a genre all to themselves. There have been dozens of them over the years, some better than others. This latest offering from the director of Australian psycho movie Wolf Creek revolves around an ill-fated tourist trip along a remote river in Australia’s Northern Territory. American travel writer Peter McKell (Michael Varten) is among the group taken via boat by guide Kate Ryan (Radha Mitchell). When they see a distress flare they investigate and find a smashed up boat in a swamp. At that point their own vessel is attacked and sunk by a 7.2 metre, two-tonne indo-pacific crocodile.

The survivors (including a Br 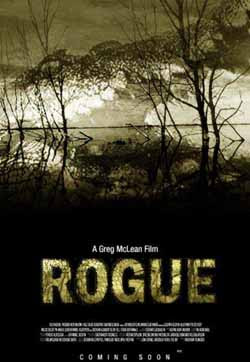 itish family with an annoyingly stereotypical upper-class accent) are forced onto a tidal island that is rapidly vanishing under water as the monster crocodile lies in wait to pick them off.

The film was inspired by the real life rogue crocodile called Sweetheart who attacked a number of boats between 1974 and 1979. Apparently he was mistaking the noise of outboard motors for rival male crocodiles.

In reality a man-eater, even a huge one, would spend at least a week digesting a human after eating them. In the film, however, the croc keeps coming back for more victims and storing them in a ‘larder’ underneath a huge tree.

The film’s ending is somewhat predictable but as killer croc films go it’s not bad. The crocodile itself is quite well realised though it looks a little stumpy with the tail seemingly too short in comparison with the head and body. Rogue is better than Dark Water or Bloodsurf but not as good as Primeval or Dark Age.

A film about an expedition in search of the thylacine sounds like a great idea and it would be but sadly this film misses a great chance. The plot revolves around zoology student called Nina (Mirrah Foulkes) who travels to northern Tasmania ostensibly to search for thylacines. However, we learn that her sister 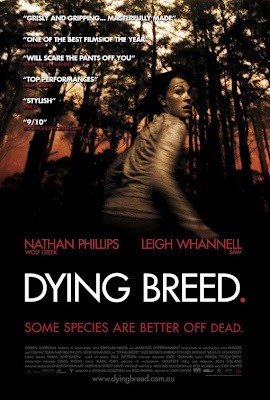 vanished in the same area five years before, shortly after photographing a thylacine track.

She takes her boyfriend and his annoying friend (who partially finances the trip) and his girlfriend along with her.

From here on the film degenerates into a cross between Deliverance and Cannibal Holocaust. The group happen across a tiny hamlet inhabited by inbred, degenerate cannibals with sharp teeth who waylay travellers and turn them into pie filling! The mutants are apparently the descendents of escaped convicts. Women travellers are used to breed with before getting the chop. We find out this is what befell Nina’s sister.

We are treated to a brief glimpse of a thylacine but it lasts only a few seconds. How much more interesting the film would have been if it had concentrated on the Tasmanian wolf, a creature that really does exist, rather than a hackneyed bunch of derivative, mythical cannibals.
Posted by Jon Downes at 9:30 AM