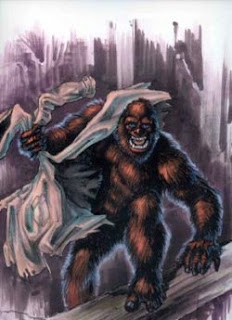 A 1978 yowie encounter in the Northern Territory has inspired a play that is now touring the country.
"NT News stories about yowie sightings in Acacia Hills were in fact a key point of inspiration for the piece," she told the Northern Territory News.
The play is the brainchild of Ella Watson-Russell, and centres around the kidnap of a man by two "hairy sisters". Intriguing!
Writing the play has apparently turned Watson-Russell from a sceptic to a believer.
There have been numerous reports of yowies in the Acacia Hills area, most recently in the 1990s.
http://www.ntnews.com.au/article/2009/09/25/87501_entertainment.html
Posted By CFZ Australia to Centre for Fortean Zoology Australia at 10/16/2009 03:02:00 AM
Posted by Jon Downes at 10:29 AM