What Richard did next... 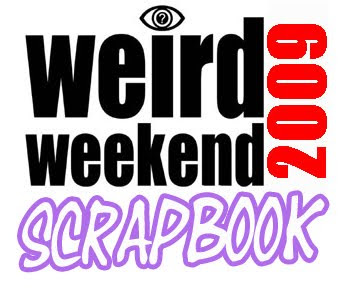 A SCRAPBOOK OF THE WEIRD WEEKEND: BEING A NARRATIVE OF THE ACTIVITIES OF MR RICHARD FREEMAN, CRYPTOZOOLOGIST, AUTHOR, EXPLORER, ADVENTURER AND RACONTEUR COVERING THE DAYS PRIOR TO AND DURING THE ANNUAL CENTRE FOR FORTEAN ZOOLOGY CONFERENCE HELD IN THE TOWN HALL, WOOLSERY, DEVONSHIRE IN THE YEAR OF OUR LORD TWO THOUSAND AND NINE.

Dave, Oll and I spent several hours erecting a scaffold to hang the flying saucer Graham had built on; the idea being to cover it with black drapes and have the kids walk through it to come out of the space ship dressed as aliens. Unfortunately we found it was so tall that it obscured the film screen behind it. So we took it down and erected some more, with Dave scrambling around like a blond monkey. Upon Jon’s arrival we were told we didn’t need the scaffold or back drop; just a small erection to hang the saucer on. It had been quite a lot of work, and all for nothing!

Thankfully there was a break in the rain on the day. Oll, Greg, Ross and I had a day of leafleting. It’s an oddity: there are some houses that have no post boxes. Several dwellings had no post slits in their doors and no outside post boxes. How the postie manages I’ll never know. I have to ask him when I next see him. Another post-related oddity is the fringes of brush-like bristles that surround the edges of most post boxes. The bristles are so stiff they crumple up the leaflets!

Erecting the marquee is always a pain in the backside as its plastic joints have long since fragmented and are now held together by gaffer tape. Each year the marquee gets a little more damaged so I think we will need to buy a new one for WW 2010.
Posted by Jon Downes at 2:58 PM