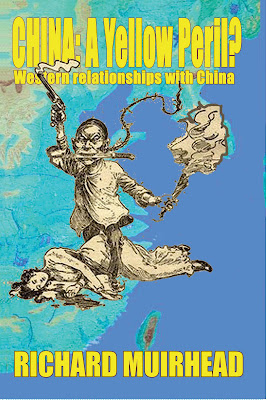 If some Victorian antiquarians are to be believed, contact between the Chinese Empire, and other Middle Eastern and Western Empires goes back to long before the birth of Christ; such as the ancient Egyptians and the Roman Empire. A Roman coin from the the time of Hadrian in the second century of the Christian era was found in Oshkosh in Wisconsin in 1883, thought at the time to have been carried there across the Bering Straits to Wisconsin by way of Alaska by a Chinese person. Muirhead`s book China: A Yellow Peril? Western Relationships with the Chinese looks at a time period long after these very early contacts, to the beginning of trading links between the West and China in the Seventeenth Century, with the arrival of the Jesuit intellectual and religious leaders.
The impact of these individuals as well as the British, French, Russians, Japanese, Germans and Americans in the following three hundred or so years created a tension that resulted negatively in the West and elsewhere in the racist Yellow Peril scare; and positively in developments such as an appreciation of China as a cultured civilisation with trade in Chinoiserie and food stuffs. In fact, between the late eighteenth century and the early decades of the twentieth century there was a debate between detractors and supporters of China as either barbarian or civilised, with relationships between British and Chinese in the colony of Hong Kong perhaps surprisingly surviving the complex change of events in China that led to the rise of communism in rural and urban China from the 1920s onwards. The Yellow Peril scare, essentially a fear of Chinese expansionism and morals, is the main subject matter of this book. Muirhead concludes that with the pressures brought upon the world by China`s massive economic growth and pollution comes the risk of a revival of the Yellow Peril scare.”

Muirhead hopes his book will dispel a tendency amongst some commentators to portray everything in black and white and an unnecessary overwhelming guilt for colonialism. In fact, there were good imperialists and Victorians, and patriotic Chinese communists.