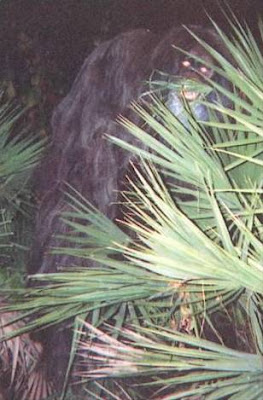 Fresh back from my first Weird Weekend, having placed my treasured golden baboon in pride of place on my shelf of cryptozoological wonder, and my doesn’t it just catch the light.

If you have never attended a Weird Weekend I can do nothing but wholly recommend the experience; there is really nothing like it. Plenty of interesting stories and tales being told and that’s before you even get to see a presentation. All the speakers gave fascinating talks, so much so that you didn’t even notice their painted faces until they had finished speaking.

On Sunday morning a film called Southern Fried Bigfoot was shown. It featured an image of the Florida skunk ape; one of a series of anonymous pictures of this mystery North American ape that were taken in 2000 by a mystery woman who had concerns that it was an escaped orangutan. While you may wonder if the creature featured really is a smelly ape or a hoax it reminded me of something I had seen before. 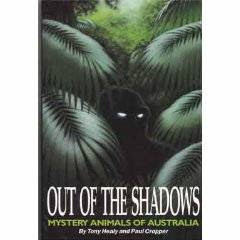 Is it just me or does the skunk ape picture resemble the cover of ‘Out of the Shadows Mystery Animals of Australia’ published 1994? I wonder, is it just a coincidence?
Posted by Jon Downes at 10:54 AM