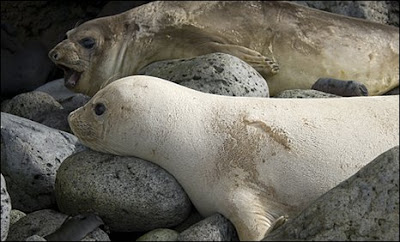 Being a massive Kipling fan I was immediately drawn to the story of the white southern elephant seal spotted on a sub-Antarctic beach.


Eared seals, which include sea lions and fur seals are more usually seen sporting unusual colours, but not true seals, a group which includes elephant seals. Details of the seal, which has creamy white fur but normal brown eyes and nose, have been published in the journal Polar Biology.

Do they mean that this is the first albino (or leucistic by the looks of it) true seal? Or the first white elephant seal? C'mon guys, we need answers.
Posted by Jon Downes at 11:22 PM

Maybe we could call it a golden elephant seal.

I've seen Northern Elephant seals, and the cows are a kind of sandy color.

Northern elephant seals are heavily inbred. They nearly went extinct in the last century. Whalers who wanted to augment their cargo of train oil would stop by their rookeries and kill these seals for their blubber, which they then cooked down into oil.

The population may have dropped down as low as 50-100 individuals. Considering that there are now 100,000 animals and considering that these are harem breeders (with only a few males breeding each year), we know that the genetic diversity of this species is greatly compromised.

BTW, I've always loved that Kipling story. Like most Kipling works, that one has a political subtext. Rikki-Tikki-Tavi is another one with some political underpinnings.