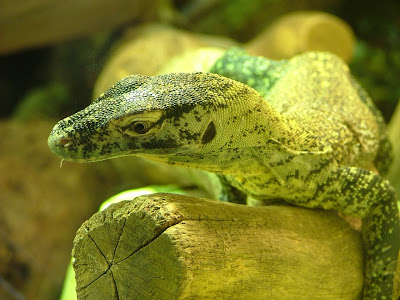 This is a young Komodo dragon that I photographed at London Zoo a couple of years ago, and a species which continues to surprise. Only a few years ago specimens in several zoos reproduced parthogenetically, and now it turns out that thes pecies is venomous.

For years accepted wisdom had always been that the only two venomous lizards in the world were the Gila monster and the beaded lizard, two closely related stumpy beasts from the deserts of the southwestern United States down as far south as Guatamala. As far as I was aware until about ten minutes ago this was still the case, and I was just about to write an "Everything We Know Is Wrong Bloody Hell" piece until I decided to check my facts. The report in The Australian reads in part:

...the lizard uses sharp, serrated teeth to open gaping wounds in its prey into which the venom easily flows. The wounds naturally bleed profusely while compounds in the venom increase blood flow and reduce blood pressure, inducing shock in the victim. They findings debunk a common belief the dragon's prey is killed by deadly bacteria in rotting food stuck in its mouth. "Their teeth are shiny white and their gums pink. They are remarkably clean animals," said Dr Fry, who worked with captive Komodo dragon's in Singapore.

But it also included this tell-tale line:

What "grooved-tooth venom delivery system found in other varanids" I thought to myself, and did a little digging. Ten minutes later I found a learned paper published in letter form in Nature only three years ago, and entitled Early evolution of the venom system in lizards and snakes. I quote:

Here we report the presence of venom toxins in two additional lizard lineages (Monitor Lizards and Iguania) and show that all lineages possessing toxin-secreting oral glands form a clade, demonstrating a single early origin of the venom system in lizards and snakes.

Bloody Hell. I thought to myself, and carried on reading:

Demonstration that the snakes, iguanians and anguimorphs form a single clade provides overwhelming support for a single, early origin of the venom system in lizards and snakes.

And what's more, there is even a cryptozoological aspect to the story, because it turns out that:

What's more, new research shows that the mega-meat eater probably inherited its "biggest" and "most venomous" mantle from its extinct Australian ancestor, the 7m-long dragon, Megalania, The Australian reports.

And the story ends:

"Australia's Megalania was probably the largest venomous animal that ever lived," he said.

So, I very nearly managed to do what I set out to do at the beginning of this article. I haven't posted an "Everything we knew was wrong" article, but I have posted an "Everything I knew was wrong" article which is the next best thing, because if you can learn something interesting and enlightening each day, like I just have, then life is still definitely worth living.

RICHARD FREEMAN WRITES: This should come as no surprise. Its now known that almost all snakes produce a mild venom, even those we once thought harmless. Varanids are the group of lizards most closly related to snakes - ergo it makes sense that they have venom.