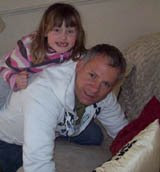 Tim Matthews is one of my best friends, and also - coincidentally - one of the most controversial figures in contemporary forteana. He has been involved with the CFZ for nearly a decade now, raising eyebrows wherever he goes. Now he has started to write fiction. But like other works of fiction produced by CFZ worthies, it is fiction where the lines of reality and make-believe meet.
This serial began yesterday, and was so popular (and Comrade Tim has such a spate of creativity) that it continues today. For how long who can say?

Marjorie Seaton was walking her dog, Toto, along a lonely country path through the village of Upper Minster when suddenly the dog started barking frantically and pulling on his lead. It was as if Toto had sensed something up ahead and he was frantic. Marjorie considered this quite unusual. After all, this was Toto’s favourite route, quite a safe one and unremarkable if beautiful.
Up ahead, Marjorie could see the outline of a large black creature and, before jumping a wall into a field full of cows, the thing looked towards her and Toto and she was sure she could see some piercing green eyes weighing her up. Toto wasn’t for waiting and he pulled forward so hard that he slipped his lead and dashed off towards the last known site of the mystery creature.
Marjorie rushed off after her pet and found him all wet and covered in mud in state of some distress. It was all most unusual and instead of following their traditional route she decided to go back towards the village and visit the local tea shop to tell see if any of her friends were around so that she could tell them about her odd experience.

“Hello Marj,” said Jenny, the nice young girl who worked at the cafe five days a week and who was very friendly towards her regulars. “Are you OK,” she asked. She liked Marj, who reminded her of her dear old Gran.

“Well, I’m not sure!” replied the older lady. “Toto went rather mad as we were walking down Dark Lane past the fields and he seemed to be upset by a black creature further up the path.”

“Really? Wow,” said Jenny, intrigued. “What do you think it was?”

“I have no idea,” Marj replied.

After work, Jenny was in the local pub talking with her friends and it didn’t take long before she was telling everyone about Marj’s mystery black creature. It was something fun to talk about! Before long, quite a crowd was gathered and people were swapping stories of supposed unusual encounters locally. UFOs, crop circles, odd feelings down Dark Lane, an odd light in the nearby woods and the time they thought they’d seen a shape in the local graveyard.
Proof.

And The General loved it. The next morning he managed to fight his way out of his bedroom into the cold light of day having heard stories from his mate Tony East who worked as a glass collector at the Upper Minster pub. Tony, who liked Vampires and spent a lot of time on Fortean discussion boards, had listened in awe as further proof of his own personal, and deeply held, views that “something odd was going on all around us all the time” were presented by the lovely Jenny to those assembled.

“I’m telling you now, something BIIIIG is going on in Upper Minster,” he told the General by MSN chat. “It’s all been kicking off mate. Sightings of odd lights, unusual shapes in the churchyard and now a black mystery creature doing the rounds. I never thought it would happen like this during my lifetime.”

“I am calling for a Regimental Turnout,” said the General who was much given to unnecessary military talk. “This time we’ll be there and I am calling the press. Nothing much happens in places like Upper Minster but this will put the village on the map and, more importantly, we’ll be famous. I can see it now; the interviews, the fees, the magazine articles, a mention in Fortean Times and those bastards as the Forteana Study Centre with all their intellectuals, scientists and international links, and damned credibility, won’t be able to touch us.”

“You’re r-r-right,” stuttered Tony, wondering whether The General was more bothered about the media glare or the mystery animal.

Next morning The General was on Marj’s doorstep. Tony knew where she lived and gave his leader the information he required. The General nearly knocked her door off its hinges and when she answered she felt a little intimidated by the camouflaged slob outside. With tatty briefcase in hand, The General introduced himself and pushed a business card he’d made up using a machine at a local service station into her hand. “I’m here about The Creature,” he boomed, spitting in all directions as the remains of a burger worked their way out of his mouth. “I need to know everything,” he added.

“Well, you’d better come in I suppose,” said Marj, her pet Toto growling at the visitor and not liking the smell of him one little bit.

“So THIS is the brave hound then,” asked The General, rhetorically, as he snapped a shot of the dog with his mobile phone camera.

“Yes indeed,” said Marj, “but really I am not entirely certain what all the fuss is about. I’m not sure what Toto saw to be honest with you.”

“Ah yes, but you will let the experts decide,” exclaimed The General. “My group has the tools to do the job and we intend to crack this case wide open!”

“But it was a fleeting glimpse of a dark creature,” said Marj, slightly horrified that this man might start interrupting the peace and quiet of her lovely village retreat with wild stories. “I’m not sure what to make of it!”

“Exaaactly,” The General noted triumphantly. “And this is the heart of the mystery....”