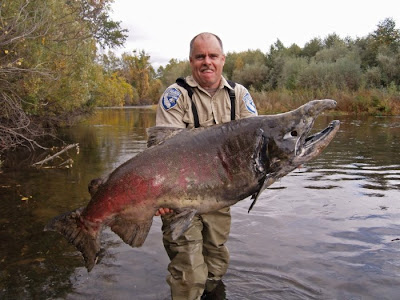 In October last year the largest Chinook salmon ever found in California washed up dead. The salmon measured over 51 inches and is believed to have died from natural causes before washing up on the banks of Lower Battle Creek, near Red Bluff, California.

Biologist, Doug Killam, said that the fish could have weighed more than the 88 lbs salmon caught in the Sacramento River, which is the largest recorded Chinook salmon in California. The heaviest Chinook salmon ever caught was 126 lbs in Petersburg, Alaska, but most of the salmon biologists have weighed in California are between 20 and 30 lbs.
Posted by Jon Downes at 5:23 PM