RICHARD FREEMAN: Between a rock and a hard place; the story of the Senaku Mole 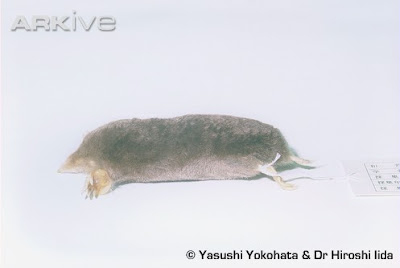 The Senkaku Islands lie northeast of Taiwan, due west of Okinawa, and due north of the end of the Ryukyu Islands in the East China Sea. They are little known in the west and are uninhabited.
They were first mentioned in the Ming Dynasty book Voyage with the Tail Wind and appear on a map from the same period. The group consists of four main islands and three large, rocky outcrops. Their collective land area amounts to only 2.7 square miles. 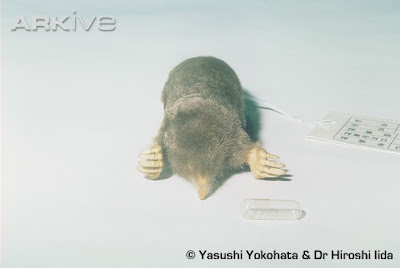 In 1979 a single specimen of a mole was discovered on the largest of the island group, Uotsuri-jima. It was found to be a new species and named Mogera uchidai, the Senkaku mole. This type specimen is the only known example of the animal. A survey conducted in 1991 found no moles but did find a tunnel.
In 1978 a pair of goats, one of the most ecologically damaging species, was introduced to the island. These have bred and now the goats are a menace to the islands ecology including the moles who have one of the most restricted ranges of any animal in the world.
Most of Uotsuri-jima is covered with subtropical forest dominated by Livistona chinensis, and there are cloud forests at higher elevations it has only recently been described and very little is known about its ecology.
The island range is currently caught up in a dispute with China and Taiwan on one side and Japan on the other.
Unsurprisingly the dispute is down to the fact that two Japanese scientists said that there may be large reservoirs of oil off the islands, currently controlled by Japan.
In the 15th century the former Ming Dynasty general Zheng Chenggong drove Dutch from the whole area and set up the Kingdom of Chenggong, based on Taiwan but including the Senkaku Islands. The Kingdom remained faithful the defeated Ming Dynasty and existed from 1661 to 1683 when Zheng Chenggong’s grandson, Zheng Keshuang was defeated by Qing Dynasty who now ruled mainland China.
After the Chinese lost the first Sino-Japanese war in 1895 they were forced to hand over Taiwan
and related territories in the Treaty of Shimonoseki.
During WW2 the US controlled the area. After the war 1945, all "unequal treaties" forced on China were declared void, including the Treaty of Shimonoseki In 1972, however the US handed the Senkaku Islands back to Japan.
No one cared much until the possible discovery of oil off the islands.

The goat population on Uotsuri-jima needs to be wiped out as it may constitute a threat to the Senkaku mole who must be considered endangered by sheer dint of it’s restricted range (no to mention the fact that only one has ever been see). Also another dedicated expedition in search of the mole, to find out if it still exists and what kind of population it has, needs to be carried out. This may prove difficult, but far from imposable under the current political situation.

If China wins the dispute it will doubtless drill for oil and set up a base on the island. This will mean curtains for any surviving Senkaku moles.

The little animals are caught between a rock and a hard place. Currently with China held at bay oil drilling is unlikely. But so long as the goats remain on the island, he moles are under threat.