NOBBY: The Queen of Wildwoods 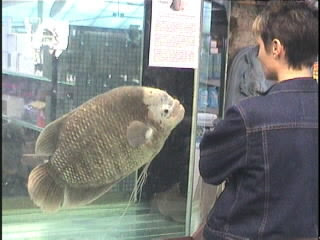 Another picture from the CFZ archives:

This is Nobby. Nobby was a female giant gourami who for many years lived at Wildwoods Aquatic Centre, Crews Hill near Enfield in Middlesex. I first met her whilst on tour with Steve Harley and Cockney Rebel in 1990, and regularly paid her visits until she died in the early years of this century.

She was a fantastic old fish, and was truly enormous, and was one of the few fish that I have ever met who was truly `tame`.
(The other was 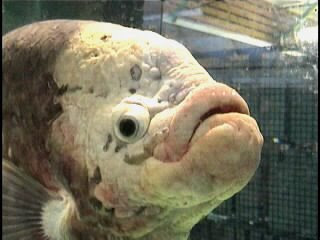 an elderly oscar belonging to my mate Brian back in the early 1980s.)

She recognised her favourite members of staff, would swim to the top of the tank to take processed peas off a fork, and to be fussed, and would interact with passers by in a way that very few fish ever do.

Then one day in the early years of this century/millenium/decade we paid a visit to Enfield, and Nobby was gone. Her tank was empty, and there was a sign on it saying that she had passed over to the great aquatic centre in the sky.

However, I went back to Wildwoods a year or so ago, and found that Nobby was back. Her unmistakeable visage grinned down at me from a glass case on the wall. She had always been the Quesn of Wildwoods, and now she will never leave..
Posted by Jon Downes at 11:40 AM