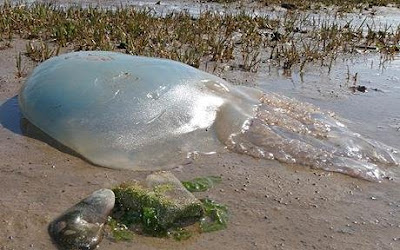 A couple of days ago this photograph was splashed across the British media. The accompanying story read: "A 4ft jellyfish - one of the biggest to be found in Britain - washed up on a popular beauty spot on the coast of north Devon" and went on to claim that "The jellyfish was caught on camera by photographer Peter Stapleton who is keeping the exact location secret to avoid panic. "

It is indeed a fairly large specimen, but of a well known and reasonably common species, and one would have thought that even in these degenerate days the advent of a large, dead, coelentrate on a North Devon beach when its not even holiday season would be unlikely to cause a `panic`. May I suggest that the fact that the location was being kept `secret` has more to do with the fact that after the ridiculous furore surrounding the dead seal back in January, Her Majesty's Press wanted to ensure that we wouldn't get a piece of the action this time.

Who cares? Its only a bloody jellyfish.
Posted by Jon Downes at 8:40 AM