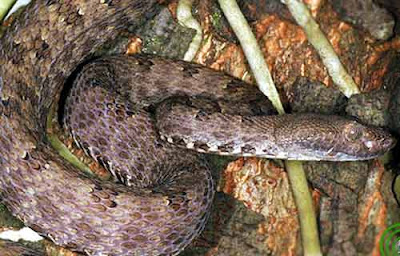 There is a new species of Vietnamese pit viper (Protobothrops trungkhanhensis). That’s jolly nice, but the case actually presents some interesting Fortean characteristics, because for some reason known only to the Gods of the internet, every single news item that we have found about the snake describes it erroneously as a brand new species of “rattlesnake”.

The thing that is both interesting and worrying is the way that the completely erroneous information has been disseminated willy nilly across the internet.

Even www.wildlifeextra.com who are a generally excellent source for information write:

“The newly discovered rattle-snake is named Protobothrops trungkhanhensis Orlov, Ryabov & Nguyen. The snake is relatively small when compared to other Protobothrops species, being only 733mm in length, with a small triangle-shaped head.

Nguyen Thien Tao, curator of amphibians and reptiles of the Vietnam Nature Museum who co-authored of the discovery, said that this is the fourth species of rattle-snake of the Protobothrops family found in Vietnam.”

One of two things has happened, as far as I can see. Either there was a cock-up early on, probably in the translation between English and Russian (one can imagine a bored sub-editor doing a cursory Google search and assuming that because rattlesnakes are pit vipers the reverse holds true) or - more disturbingly - there is an entire culture of journalists just cutting and pasting other people’s information.

Now, I am very aware of the Biblical quotation about `casting the first stone` at this point. Some years ago, during one of my more spectacular bouts of uncontrolled bipolar activity, I had a job working for a natural history partwork.

I blotted my copybook seriously by resorting to the aforementioned cut and paste techniques, and was sacked. In my defence I was as mad as a bagful of cheese at the time and I have no real recollection of the events in question, but I will freely put my hands up and say mea cu;pa.

But that was long before I had any pretensions to being a reputable scientific journalist, and the fact that the rattlesnake identification has been used on so many occasions to describe this totally un-rattlesnake (it doesn’t even have a rattle for goodness sake) is a little disturbing.

The other explanation is that there has been a major re-evaluation of the taxonomy of pit vipers, and both Richard’s and my information is out of date, and we are just making idiots of ourselves by making an issue of this case. It is certainly a possibility.
Posted by Jon Downes at 5:34 PM

"there is an entire culture of journalists just cutting and pasting other people’s information"
Hey, the real cryptids are the journalists who do their own research and DO NOT cut and paste other's information. Hate to wreck your faith, but alas your statement above defines a huge swath of the journalistic community now.