I SUPPOSE YOU MIGHT SAY THEY COME FROM MIDDLESEX 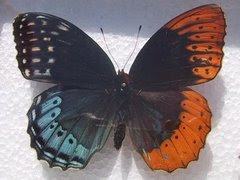 Yesterday I wrote two articles about halved gynandromorphs. I thought they were mildly interesting and thought nothing more about them. However, this morning as I wandered into the office after having let Biggles out to rush around the garden and bark joyously at the brand new day, I was greeted by a mild shock.

No less than five emails saying essentially the same thing: The butterfly pictures are very pretty, but what is a halved gynandromorph?
A gynandromorph is an animal in which the male and female charecteristics both appear, and a halved or bilateral gynandromorph (most often seen in butterflies, and occasionally crabs) is a specimen which has the left hand side of its body one gender and the right hand side the other. This is most noticeable in species with marked sexual dimorphism like this Diana fritillary (Speyeria diana) - found in several wooded areas in southern and eastern North America.
It is one of the State Animals of Arkansas, from who's website I stole the following: 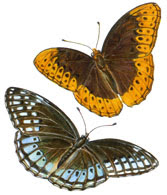 "The orange males have black outer margins and the females are iridescent blue or blue-green above and black below.
The Diana once had a wider range, but now it is found only in or near rich bottomland woodlands in the Appalachians and sparingly in the Ozarks. "
Posted by Jon Downes at 7:08 PM