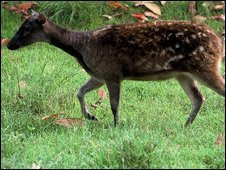 The BBC have brought us good news for what is probably the rarest deer species in the world. The Visayan spotted dear is one of the rarest and most narrowly distributed mammals in the world, with only a few hundred wild animals thought to remain. Indeed, a survey in 1991 found that the species had already become extinct in over 95 percent of its former range, largely as a result of intensive hunting and extensive deforestation, with land having been cleared for agriculture and logging operations at a frightening pace. Hunting also poses a significant threat to this Endangered deer. 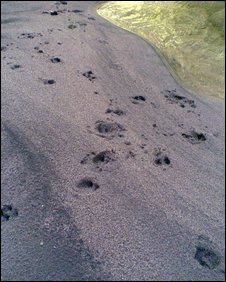 The Visayan spotted deer is afforded some degree of protection through its occurrence in Mt. Camlaon National Park, North Negros Forest Reserve, Mount Talinis/Lake Balinsasayao Reserve and the proposed West Panay Mountains National Park. Although Visayan spotted deer are legally protected, their distribution in remote, dense, inland forest makes the practicalities of guard patrolling very difficult, and hunting therefore continues. In 1990, the Philippine Spotted Deer Conservation Program was set up to initiate a captive breeding programme and a number of other conservation measures, including a public education campaign and an annual series of conservation workshops. Visayan spotted deer are currently held in captivity in Mari-it Conservation Centre in Panay, two breeding centres in Negros, and a dozen zoos in Europe. 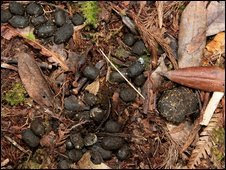 However it has hardly ever been seen in the wild, and so the discovery by an expedition team led by Craig Turner and James Sawyer of tracks and scat, proving a small population survives in the wild, despite the ongoing threat to its survival from hunting and deforestation, is significant.
Well done guys, and thanks to Fleur for bringing this to my attention..