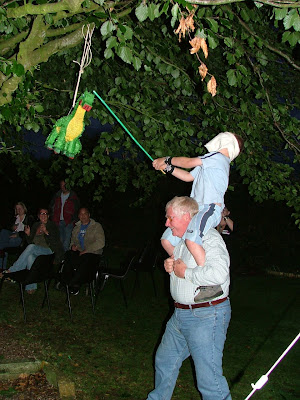 Those of you who have been regulars at the Weird Weekend will mostly all know Stuart Rickard. He is the bloke who lives next door to me, and who is also Chairman of the Community Centre Committee which manages the venue which we take over once a year.

He is a nice guy and can always be seen necking back the tequilas at the cocktail party and helping the younger attendees with the more rigorous bits of the pinata (see left).

Last year he even came on stage and gave a short talk about how the Community Centre is at the vanguard of energy saving technology and is doing its bit to help the village achieve carbon neutrality.

All of you who know Stuart are going to be appalled by the picture of him in the press cutting presented here. He has serious kidney cancer and looks thirty years older.


The good news is that the people at 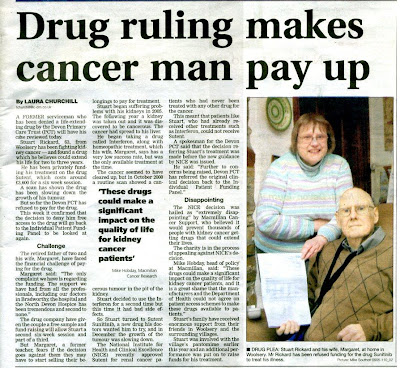 the National Institute for Health and Clinical Excellence (NICE), who have to have one of the more sickening acronyms in modern Britain, have changed their mind, and Stuart is now going to receive the drug.

But the implications of this are appaling. It is just like what happened when NatWest cancelled my bank accounts for no good reason a few years ago. For as long as the injured party does things through conventional channels nothing happens. As soon as one writes a letter to the newspapers, or contacts the MP, or does anything which will focus a searchlight of unwanted publicity onto whichever part of the faceless beaurocracy of our increasingly neo-Stalinist state has screwed up this time, then they capitulate like toy soldiers being knocked over by a playful puppy.

No wonder the increasingly cvacuuous media is so powerful.

So, congratulations to Stuart. Let's hope the medicine works mate. You are in our thoughts and our prayers. And commiserations to us all for living in such an increasingly messed up society.
Posted by Jon Downes at 5:59 PM