GUEST BLOGGO FROM NICK REDFERN: Completely Off Topic but.. 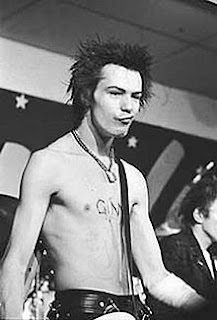 As surreal as it may sound for those of us who lived through it, today marks the 30th anniversary of the death of Sex Pistols bass-guitarist, Sid Vicious. 30 YEARS! Of course, in reality, Sid could play the bass about as good as I can pilot the space-shuttle. And the biggest mistake the band ever made was parting ways with original bassist Glen Matlock. But the important thing about Sid was that he looked the part, with his sunken cheeks, sneer, spiky black hair and leather-jacket. But, of course, it all got very dark when Nancy Spungen came on the scene, and Sid ended up as nothing more than a useless heroin junkie, doomed to fail and die - which is precisely what happened. Despite what some have said, there was nothing glorious about Sid's demise.

There was none of that "I hope I die before I get old"-style romanticism. It was all about someone who got in too deep with some very dark people, who got dragged down, and who ended up dying while trying to live up to an image that was, basically, just that: an image. But, it was without doubt that image which defined much of late 1970s punk-rock, and left a mark in musical history that is as recognizable today as it was 30 years ago. So, today, let's all raise a glass to poor old Sid. What else can I do but quote from a bloody good sing: "Oh, You Silly Thing..."
Posted by Jon Downes at 5:54 PM